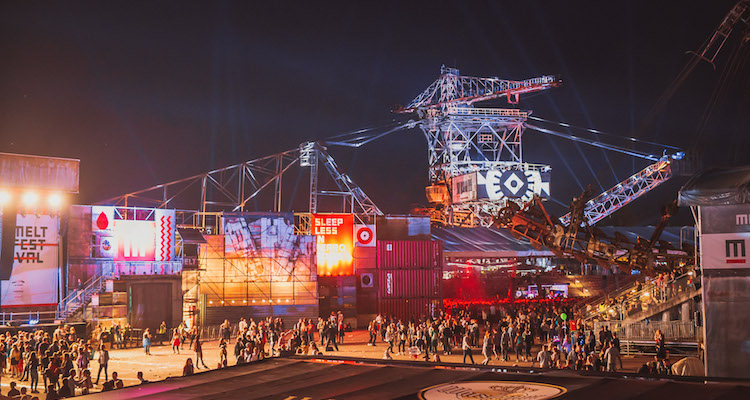 20 Years Of Melt! Festival: The Highlights 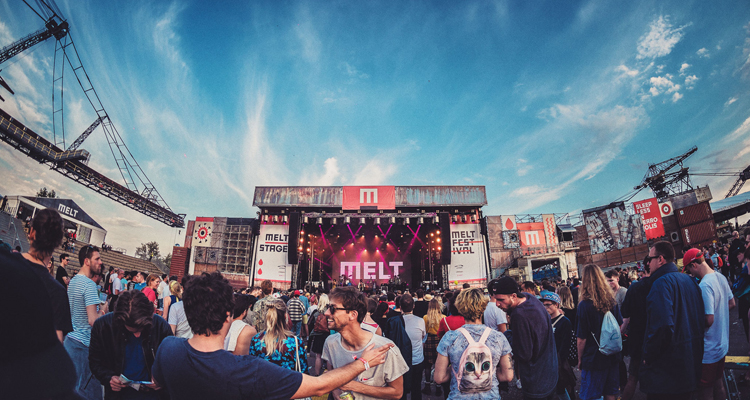 Posted at 13:12h in Events, Music by Family 0 Comments

The first thing anyone who’s been to Melt! Festival will say is “the site is f***ing incredible.” Melt! is located in a former East-German open-air mining site called Ferropolis, or “City of Iron.” The world’s largest man-made machinery, designed to excavate millions of tons of coal from the earth, tower menacingly into the air, 130 metres long and 30 metres high. The gigantic industrial machines (about 5 are splayed across the site) display jaw-dropping laser light shows; you can feel the heat of arbitrary fire cannons launching into the air from their summits. Add to this the backdrop of shimmering Lake Gremmin and some of the most detailed, attentive stage design I’ve ever seen (yes I’ve been to Glastonbury) and I have to agree that yeah, the site is fucking incredible.

Next, the line-up. One of the appealing features of Melt! Is that there really is something for everybody. With over 100 acts of multiple genres on 8 stages across the 4-day weekend, there’s a wide variety and a refreshing lack of pretension here. The headliners themselves are diverse enough – Die Antwoord, Bonobo, M.I.A., Kamasi Washington – but there is much, much more to Melt! than the headliners.

The various stages dotted between the machinery each serve a coherent and wildly different purpose. At the Big Wheel Stage, where you can get up close and personal to quite a terrifying machine, you’ll be able to catch the world’s biggest house and techno DJ’s, including Marcel Dettman, Daniel Avery and Jon Hopkins. Head to Gremmin Beach and you’ll find electro pioneers such as Red Axes, Job Jobse and Kolsch. The Medusa Stage indulges indie fans with performances from Kate Tempest, Sampha and Hercules & Love Affair.

The line-up is curated perfectly in line with the layout of the site, meaning if you’re into a specific kind of music, you won’t be trekking around from stage-to-stage but instead able to amble happily to a nearby stage or simply stay put and wait for the next act. Whoever’s idea it was it to put Jon Hopkins, Bicep and Tale of Us back to back at The Big Wheel Stage gets a virtual high-five from us.

Undeniably, the organization of the festival was stand-out. This year was the introduction of cashless payment. Payment docks were easily accessible 24-hours across the site – you top up any amount from your debit card onto the chip on your wristband and away you go. To pay for anything (including the food which, by the way, was reasonably-priced and completely delicious) you just stick your arm out. This meant zero queuing or faff for anything (take heed UK festivals). The only downside is that it’s easy to get over-generous when you’re completely shit-faced and all it takes to buy a round of drinks is a flick of your wristband. 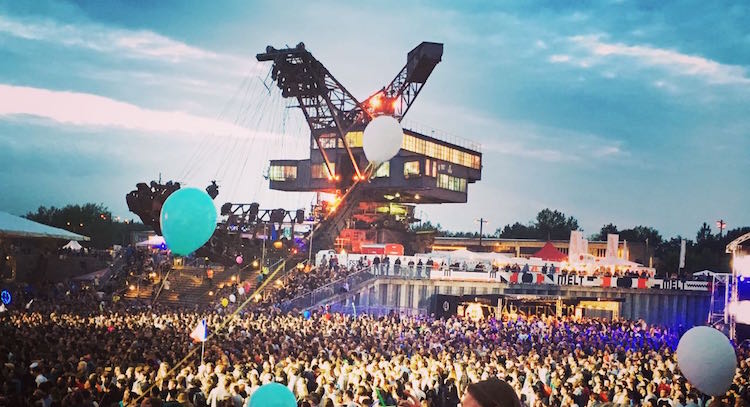 Ohana were on-site to scope out the very best acts, stages and moments of Melt! Festival 2017.

Berlin club institution Sisyphos made the genius move of creating their own lake-side stage area at Melt! 2017. Nestled on the edge of the beautiful Gremmin Lake, the Sisyphos area was reminiscent of the club itself on a larger scale. The stage area emerges on the other side of a fairy-lit forest. Trees are illuminated with multi-coloured lights from below and awnings and decorations are scattered all over the space, making for an immersive and trippy atmosphere. A telephone box sits on the edge of the area; pick up the phone and a voice will spew nonsense to you about the moon and the stars. Ideal if you fancy an existential 4am chat.

The music here was light and low-key, a great place to go while waiting for an act to start or if you fancy a mellow dance. I spent a lot of the afternoons here, lounging by the lake, watching festival-goers swimming and enjoying the chilled out beats. There’s even a cinema area decked out with cushions and lounge chairs. The addition of this stage to the festival really complemented the atmosphere and made the down-time before the larger acts began extra enjoyable. 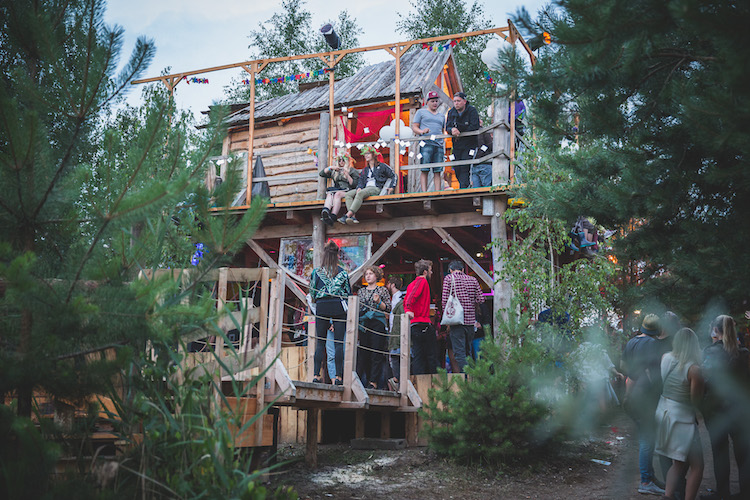 Some of the very best DJ’s and producers in electronic music were present at Melt! 2017, and the ones I witnessed absolutely killed it – Jon Hopkins, Tale of Us and Daniel Avery to name a few. But the one that stood out was Dixon on Gremmin Beach on Saturday night.

He’s an absolute puppet-master of crowds, harnessing the energy of the festival-goers through his house-infused high-energy mixes. His set came after a mammoth line-up on the Big Wheel Stage, which made his ability to get the crowd going even more impressive. The Berlin-based DJ played for over 4 hours to what should have been an exhausted crowd (3 – 7am), but the killer light-show and unparalleled sound-system paired with the producer’s insane mixing skills and incredible drops meant that he was the stand-out electronic act for us this weekend.

Simon Green’s Bonobo project has always stood out from the crowd, and his orchestral performance alongside his band was no different at Melt! Festival. Bonobo stand modestly as silhouettes against an epic light display backdrop as they play their soul-smashing anthems – one of the few times at Melt! Festival where both electronic and indie fans alike stood side-by-side, equally delighted to revel in the powerful musical display.

There’s no denying the sheer scale and reach of Bonobo’s live shows. The band played favourites from their 2017 album, Migration, as well as older classics, each met with delight from an elated audience. Bonobo is an act that must be seen live to fully appreciate the scope of their musical abilities – headphones don’t quite cut it.

Several songs were accompanied by Szjerdene Mulcare who also features on their album Migration. Unfortunately, her voice did not carry well (in Break Apart especially) and it seemed like volume control was a bit of a problem. Her vocals would fade in and out, sometimes inaudible and then so loud it was almost uncomfortable. I wondered for a second whether it had anything to do with the sound engineering but, seeing as the rest of the sound had been flawless so far, I assume the issue didn’t lie there.

Nevertheless, Bonobo’s performance was nothing short of epic and the sheer power of the band alone proved them to be one of the most impressive acts of Melt! 2017. 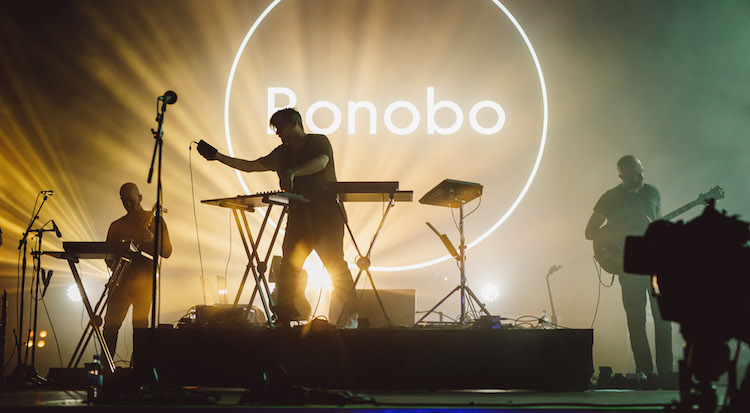 The power-duo from Belfast had a difficult slot – sandwiched between a high-energy power-set from veteran Jon Hopkins and electronic-music’s current poster-boys Tale of Us.

Despite this, and after an epic set from Jon Hopkins, there was undeniable electricity in the air as Bicep’s famous 3-armed logo flickered up on screen. The two DJ/producers had a short-but-sweet one-hour time slot to blow the crowd away at the Big Wheel Stage and that they did. Opening with house-infused pumping breakbeats, the atmosphere was supercharged as the duo took the audience on a journey with a rougher, more techno-leaning set than their previous signature ‘90s house ensemble. Whether or not this was what the audience expected, it was this fast, hard energy that set them apart from their peers and made their performance exceptional.

Resident Advisor’s Sleepless Stage has become an institution of Melt! The dusty, dystopian area is located just outside the festival gates and is open for 90 hours around the festival clock. The stage plays host to some of the world’s most sought after techno and house DJ’s as well as acting as a platform for up-and-coming artists to show what they’re made of.

Fatboy Slim hosted the pre-party here on Thursday night and over the course of the festival the likes of Cinthie, Mall Grab and Francois X absolutely smashed out sets.

The best thing about the Sleepless Stage is it feels slightly rogue compared to the rest of the somewhat commercial festival – here you can bring your own drinks and dance the night (or day) away without having to worry about spending a lot of money on refreshments. This year the RA team went all-out with insane light displays to accompany the DJ’s and run-down, post-apocalyptic stage design to add to the unruly atmosphere.

Downsides to Melt! Festival this year were few and far between, but one is that the festival site opens each day at 4pm. Apart from the Sleepless Stage there isn’t much going on outside of those hours, and sleeping in a tent past 10am is impossible as the sun turns it into a sauna. This means there’s quite a lot of time to be killed during the day, although there is a beach area to lounge by with food stalls and pontoons. If it wasn’t for the Sleepless Stage this would be a bit of an issue, and opening the festival gates slightly earlier, perhaps at 2pm, would make a big difference to the daily structure. 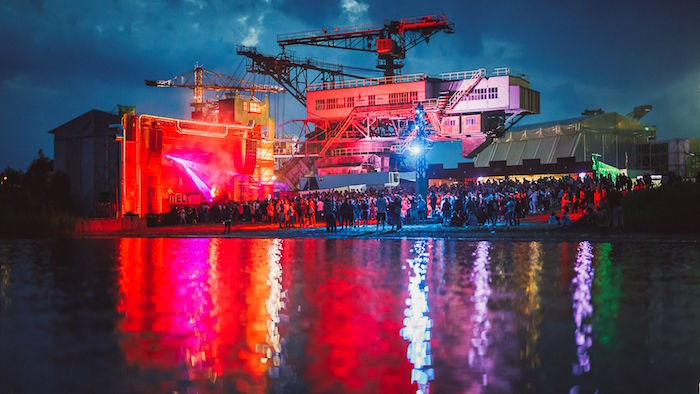 Despite this, Melt! Festival 2017 pulled out all of the stops to make it a true musical utopia – from the festival site, to the light displays, to the line-up, to the unbeatable atmosphere. Can’t wait to see what Melt! has in store for 2018.

Words by Alice Austin, read more at No Filter Zine