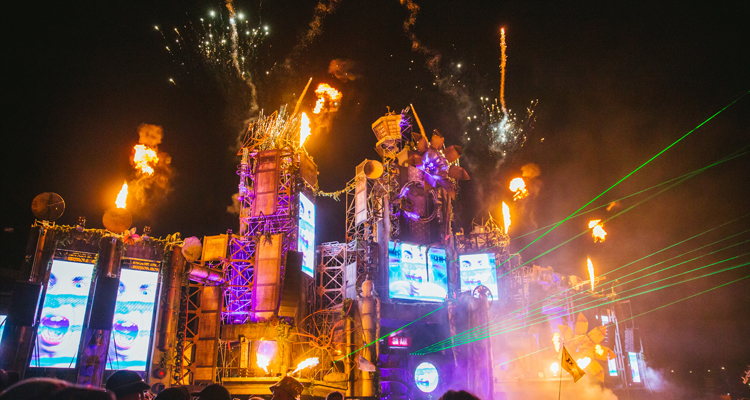 Hello Ohana readers, here is your annual Boomtown review from the UK team.

We did things a bit differently this year – we brought our photographer – so expect more posts in the coming weeks with collections of festival photos From Amy Mifsud that you won’t find anywhere else.

For our 5th year and Boomtowns 11th installation we headed to Winchester to see the ever improving Boomtown ground on the Matterley Estate. Getting on site was smooth and quick, and the weather was on our side.

As Ohana family we were naturally keen to get the first taste of the Wednesday warm up acts. First was Om Jai in the Hidden woods – a perfectly shaded woodland stage with perfect chill out area and balcony toward the rear, sand underfoot. A go to early venue for myself over the years especially when it is a hot day. Of course this may sound like a British moan to our European readers, some of whom were experiencing over 40 degrees that week!

Back up to the hilltop and into the Psy Forest, dubbed the “not so” Psy Forest this year. DJ Vadim mixed up a set of hip hop funk and classics before Mungos Hifi mastered a vibrant 2 hour sundown show that by the end saw one of the biggest crowds the Psy forest has surely had. 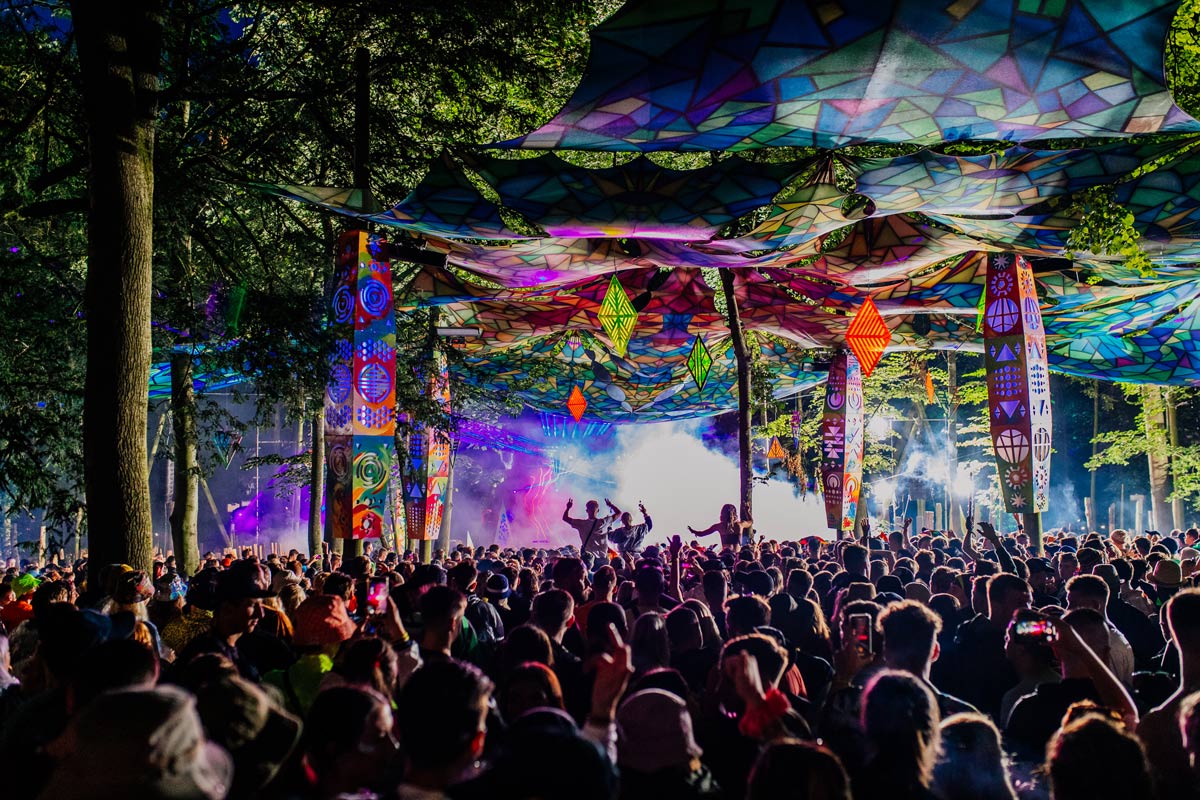 This year saw the sell-out of tickets over the weekend. Over 66 thousand attendees and crew. Boomtown recently won the right to expand in capacity – so we expect the improvements to keep coming with new and larger stages each year. Boomtown are also due to open a venue in Bristol (Boomtowns HQ city) – its first event is a Halloween even which I will be attending for sure! Area 404 is the venue – keep your eyes peeled for another incoming Ohana venue review!

One of the questions of the weekend for many was Saturday Night – Chase and Status on the newly designed Relic Stage or The Streets on the Lion’s Den? The Streets only just won it for me, and thank fully so as Mike Skinner and the band put on a fantastic performance. Full of energy, inspirational words and with great crowd interaction. At one point he even climbed up the set and got in the waterfall, however I doubt that had been discussed with the stage manager beforehand. The Streets were an all-round unique and impressive homegrown headliner for Boomtown. 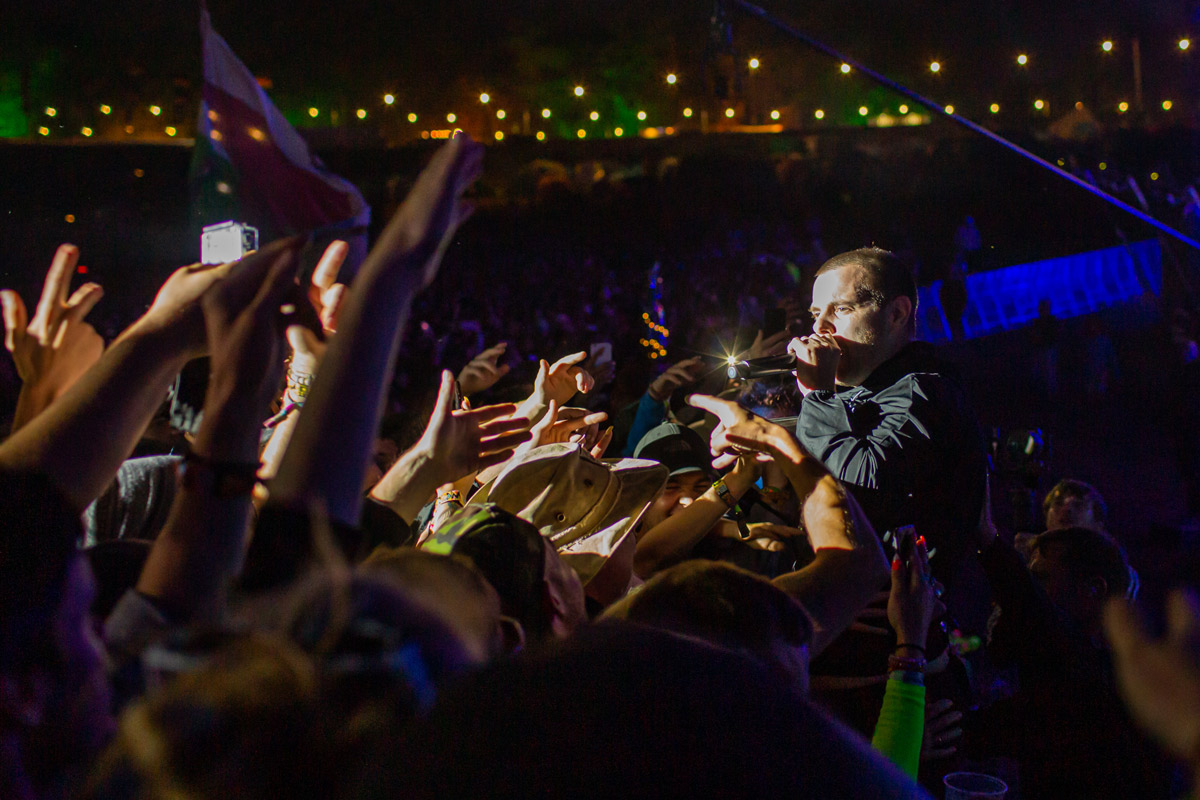 I think the biggest improvement this year by far was the general Downtown district. The Relic stage looked a world away from the previous year’s Bang Hai Palace, showing how much is being invested in keeping the festival fresh and continually changing, something which other large UK festivals don’t seem to do as well.

Unfortunate windy weather meant that the relic stage was shut on Friday Night, but a well organised plan B meant that all the acts were moved over to the Lions Den with extended hours – something which may never be seen on the Lions Den again. 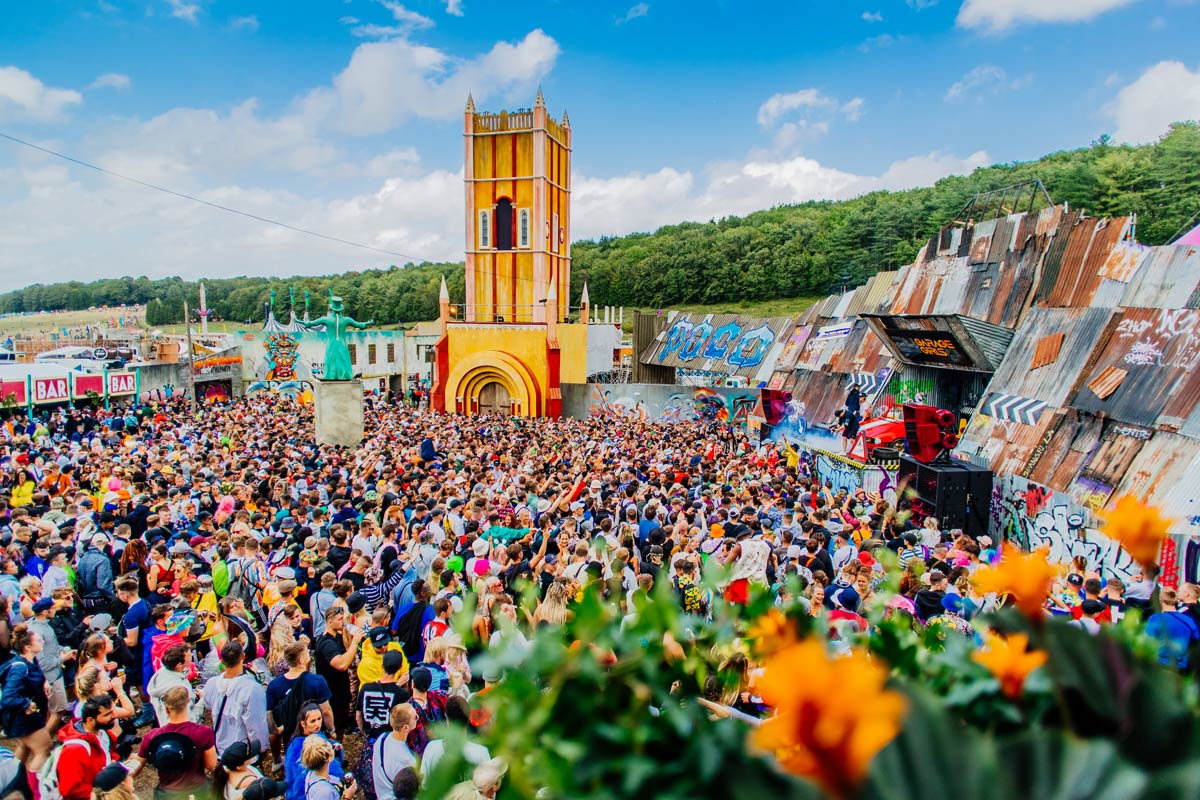 A lot of effort had gone into the Scrapyard this year – easily one of my favourite venues. Great visuals and effects and the sound was exactly what you would expect. Mandidextrous and Dr Peacock (in the rain) was the high bpm option for our Thursday evening and no amount of rain was going to dampen our mood for Hardtek.

A special mention to the Gorilla tactics crew at the Wrong Side Of The Tracks stage on the Hilltop. Yearly improvements to our favourite metal monster train along with new sound from Raze Sound System provided an annual injection for all our filthy bass-heavy needs.

Sunday came quickly and came with it a chance to watch old school hip hop Legends Salt and Pepa bring a mix of female empowerment, classic hip hop dance routines and a timeless charm to the Town Centre. Sunday spirits were high in anticipation of Prophets of Rage. As a long term fan of every collaborative artist in the band I was unsure if it was going to match previous performances of each band I had seen. This was not the case, as Tom Morello seamlessly took us through the rock, metal and hip hop fusion with lots of fire, synchronised crowd bouncing and epic build ups that brought the perfect end to the main hilltop stage. On a par with Limb Bizkit’s closing Sunday set in 2018 – something I never thought I’d be writing. 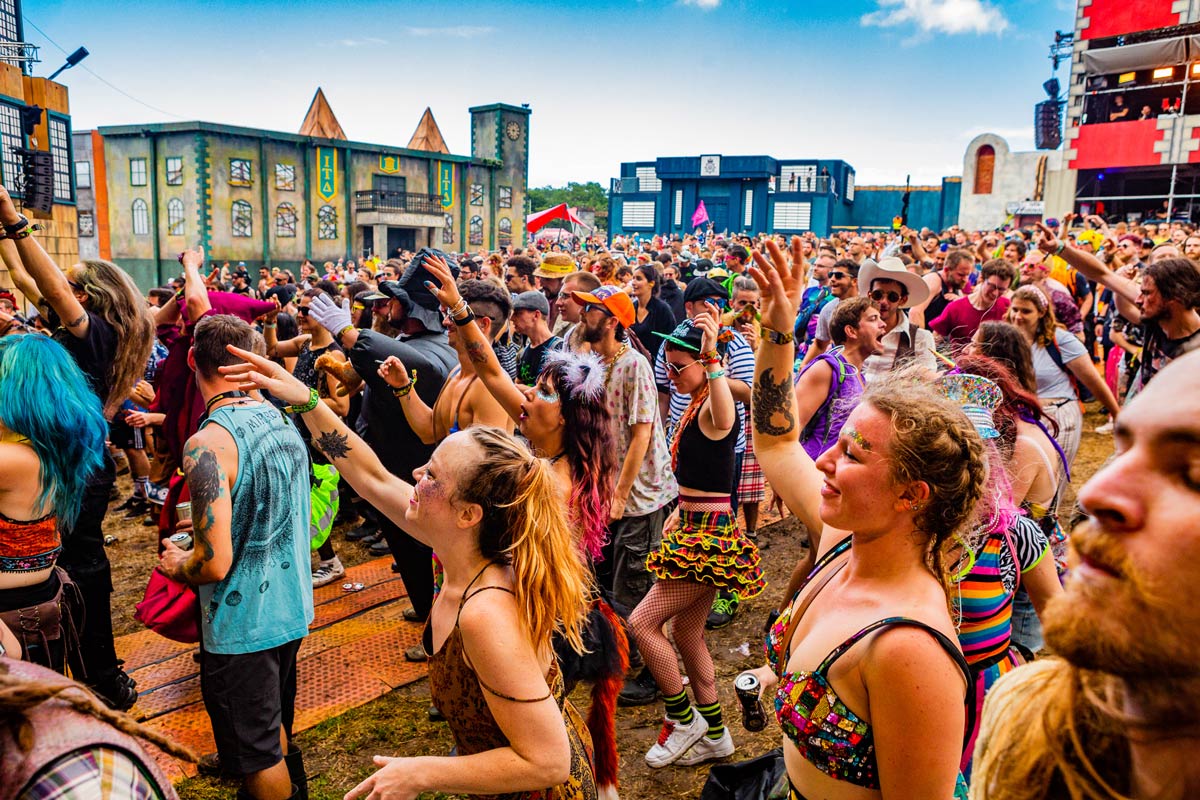 The midnight closing stage show down choice was the Nucleus Stage – formerly sector 6. Amelie lens closed the techno-based stage for the year before the finale which brought ten minutes to close Boomtowns storyline and see us off with another year of development and growth in all aspects of the festival. It must be noted that there was also a push that saw campsite waste drastically reduced this year. Something that we hope to be able to report every year. 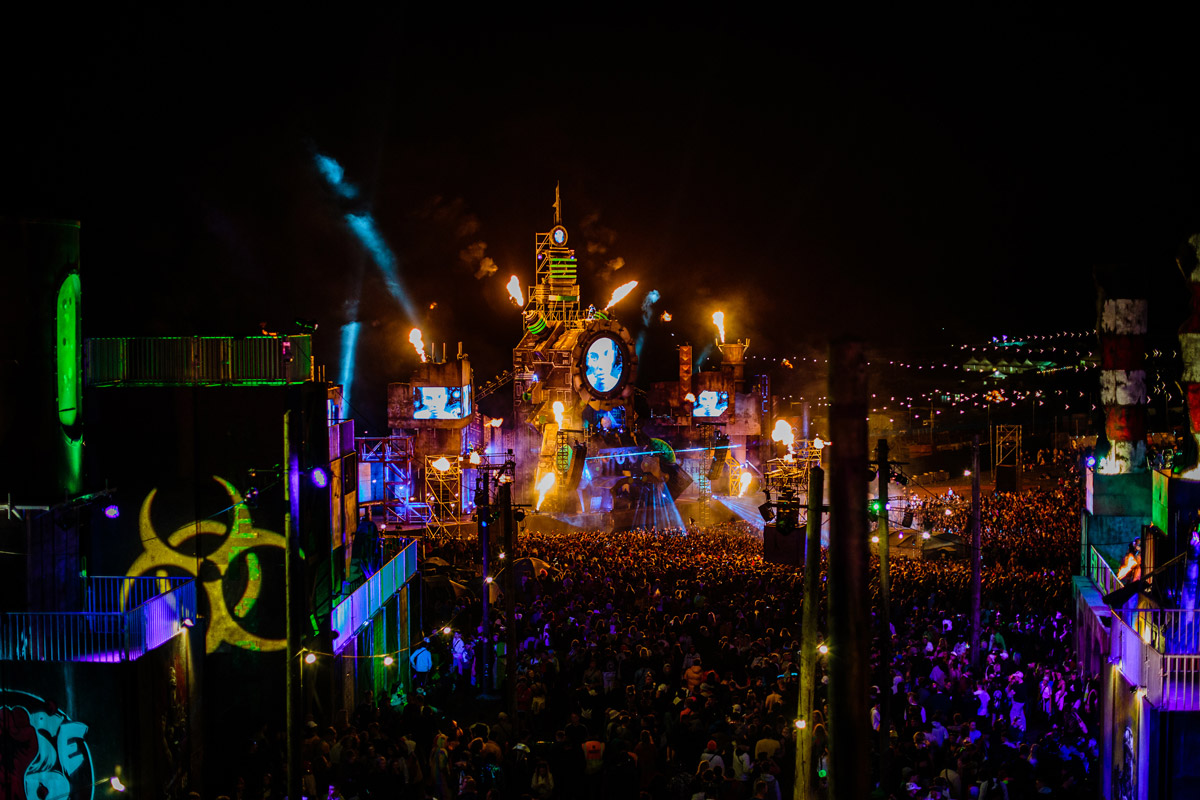 Watch out for upcoming posts on tickets, line up and travel over the coming year. Check the boomtown hashtag for all the latest Ohana Boomtown news.

Thanks to Sammy at Ohana for the opportunity, and thank you to all the Ohana readers. Put Boomtown 2020 in your calendars now!