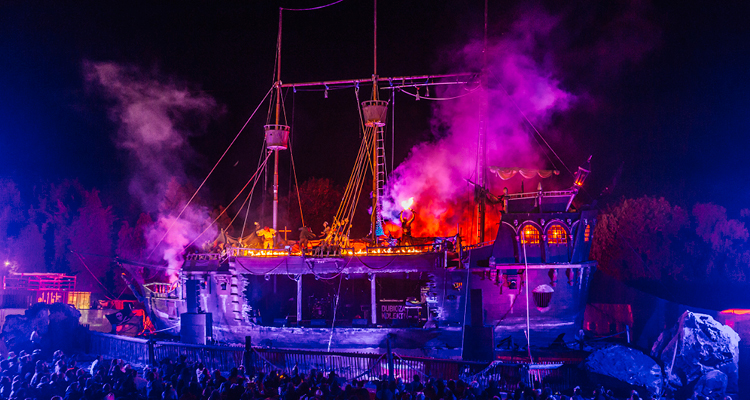 Posted at 19:57h in Events by Ohanamag 0 Comments

Boomtown Fair. Chapter 8 – could the legacy live up to the musical provenance and artistic individuality of this famous temporary city? Chapter 8 provided all you need to know, with original features and outstanding new stages, all of which were a feast for the senses.

I shall start by saying, that unlike any other festival, Boomtown keeps the excitement and alive all year round with their storyline and video updates related to the mysterious figures that adorned Bang Hai palace at the end of chapter 7 – well, these revolutionary masked men where to make chapter 8 one of the most hyped festivals of the year, after the series of videos had alerted the crowds to the impending… Sector 6!

As the Thursday came, and the festival got underway, we were blessed with fine weather, and an even finer set of all-out-up-for it punters, many of whom had arrived in festival fancy dress – after all boomtown breaks the festival tradition of having a ‘costume day’ – for every day is fictional for both workers and ravers alike! 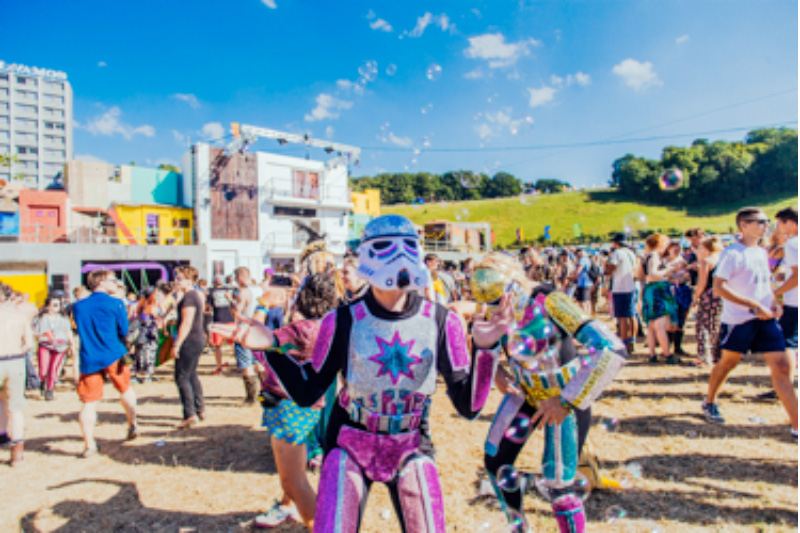 Trawling through the pop up town districts has always been, and will always be – an eye opener at the creativity and hard work that goes in to making this temporary mixing bowl of madness and ingenuity – all set in what is traditionally an entirely quaint part of the Hampshire countryside, the Matterly Estate.

The Town Hall looked spectacular – nothing to give away that it was not a real building converted into a stage – the perfect setting to see The slackers take their uplifting and bouncy New York ska vibes to the UK. When they twice mentioned how good it was to be playing ‘in the west country’ – a moment of pause before a roar of excitement from the mostly west-based crowd became a great talking point for us as we left to see how the forests of Boomtown could provide us with some shade. 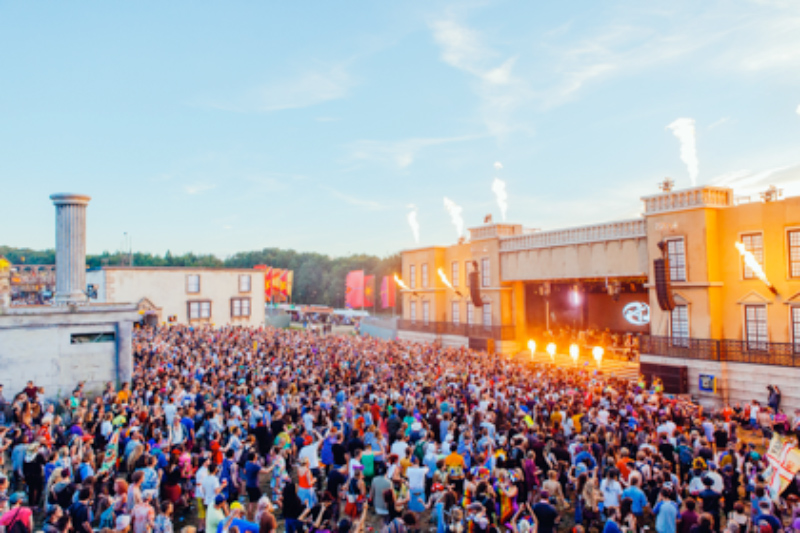 Not to disappoint, the sand floored forests with full-shade cover and hypnotic psychedelic music set the tone for a mid day rave rest – essential as a pit stop to see the opening of the much talked about Sector 6!

Down the dusty hill we went, veering off to a field previously unused – so see the towering obelisk of noise and mayhem that was sector 6 – complete with the Born on Road takeover rinsing out some dub and laying over melodic bars to warm the crowd up. Gardna’s own lyric of ‘rewind if the dub is a madness’ seemed a fitting way of describing the set. Perhaps why the young Bristol based MC was also seen on stage with the legendary likes of Demolition Man and Skibadee with 4 sets over the weekend in a mash up of UK music styles. 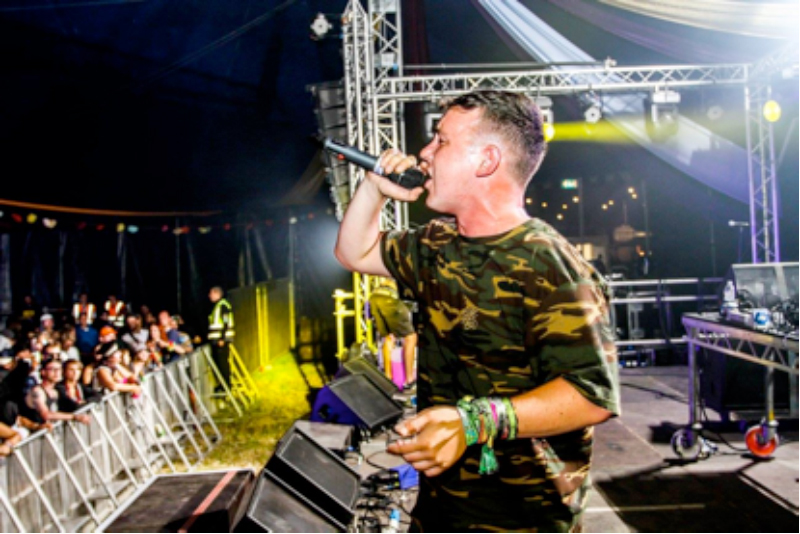 Friday saw more of the festivals most unique dress come out and we allowed ourselves to be drawn in through the corridors of the town to experience some unquestionable method acting to entertain us, notably a back street surgeon telling us to calm down, and that all we could hear was the ‘skinning of gingers’! Comedy value was evident – but was it all just a bit too real? Only Boomtown can incite such questioning!

Friday was the day, and a cool start to the day was perfect to conserve the energy levels to join the most excited crowds who were drawn to the Lions Den stage for what was to be the best performance I have seen Madness give (and I don’t say that lightly). The Kings of ska and classics – another band I hope will become long term Boomtown regulars! 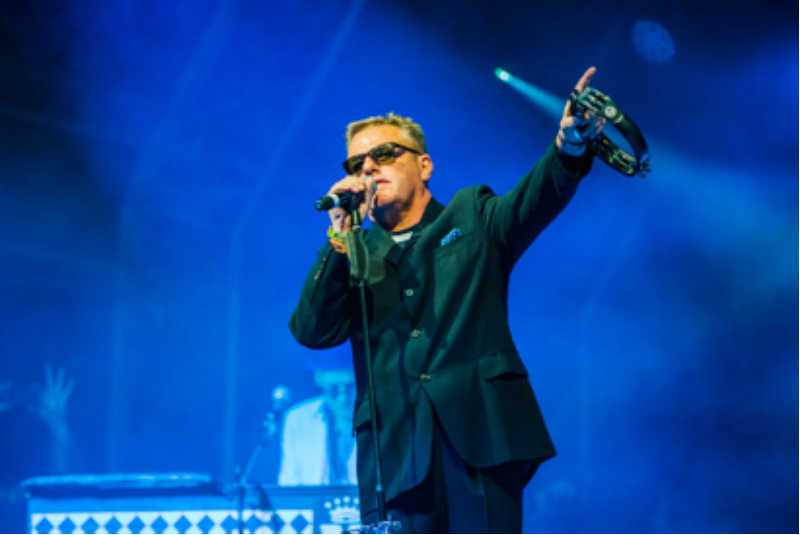 The second half of the festival provided a chance to slow the pace, enjoy some great unique festival food and delve deeper into the world of the micro-venues. 2015 saw Ohana mag praise the efforts of many of such venues, one of which being the Gorilla Tactics ‘Wrong Side of the Tracks’ stage – an epic metal monstrosity of a train with great attention to detail. This year it had moved around the corner, bigger, bolder and bass heavy.

As we entered a conductor gave us a timetable (conveniently of the set times!) and the first thing that caught our eye were soot-covered, dungaree-wearing, full character actors cleaning the ‘stage’ dancing and sweating hard enough to put the crowd to shame, a great effort all round – a highlight being our surprise viewing of Devvo’s set. Devvo – the original internet viral, come to life in his classic burberry cap and blue striped polo shirt. 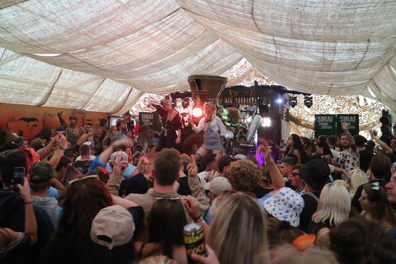 The Downtown area of Boomtown had changed as the Boombox was replaced by the Scrapyard – something that I thought would be missed – until I saw Koan Sound mash up the dance on another towering stage that looked like it could come out of a transformers movie. Perfect reverberating bass off those industrial containers! 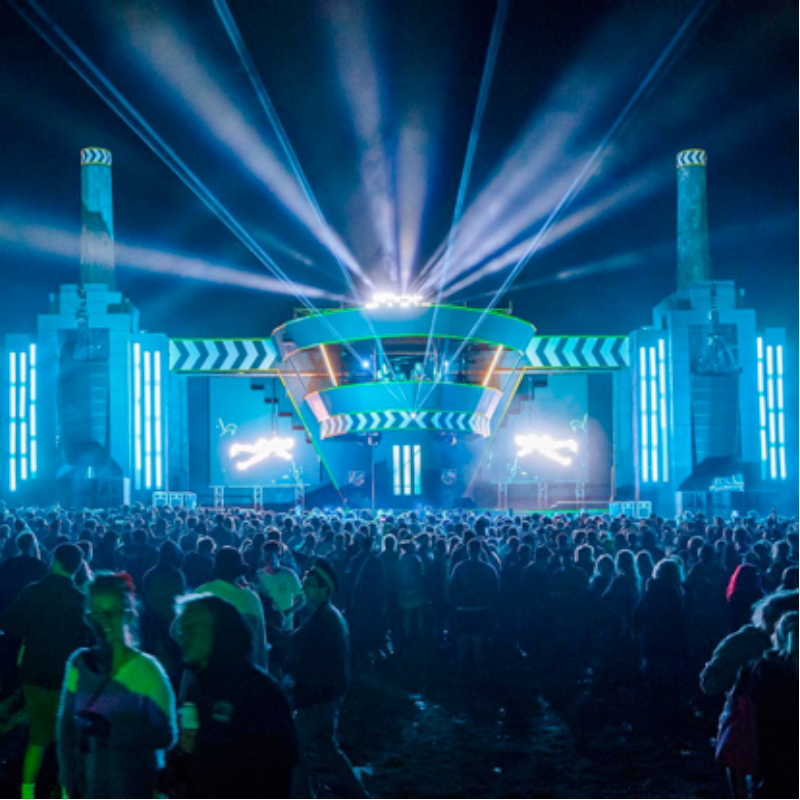 Poco loco magnetised us in with a mesmerising performance from DMC championship pro JFB, before Pharoah Monch took to the stage with a switch up in genres that saw no one leave the crowd, but many more were to join!

Bang Hai palace was again looking as crisp as last year – although not as packed due to the addition of the larger Sector 6. This gave us the opportunity to dance to some more ambient music, where the focus was on the visual aspect of the live mix– the transfixing mix of lasers and smoke gave an out of this world visual experience that I have yet to seen rivalled.

…But of course we had to end the festival at Sector 6, and at full throttle – where ruthless drum and bass from Hazard and his label accomplices tore up the festival better than I could have imagined. More space, more visuals, and performers on platforms so high you could be convinced they were not real. And the fire!!! All of which created the perfect end of visual and audio overload that will stay with me for a long time… and keep me hooked on updates before the ‘unmasking’ that will be Boomtown Chapter 9! 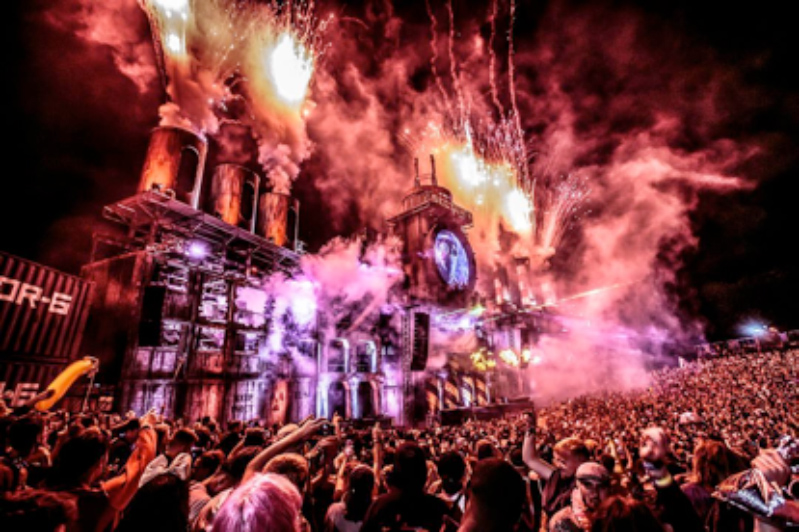