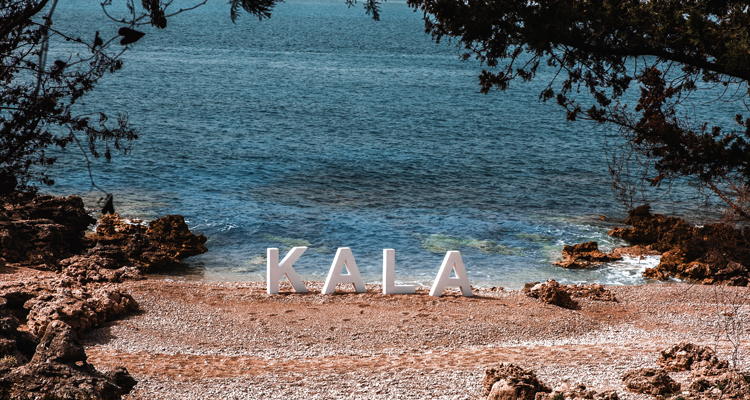 “People come to Albania and they’re happy to get out alive,” said the President of Albania. “It’s like going to jail and finding yourself in a 5-star hotel.”

He’s 6’7, wearing basketball trainers and is addressing the press attending Kala, Albania’s first electronic music festival. He’s here because this is a really big deal. Albania is the poorest country in Europe and has remained virtually untouched by tourism since it’s release from communism in 1992.

Not many people realise that the coastline rivals that of the Caribbean. The water is crystal clear, the beaches are unspoilt and the sea is the perfect temperature. Food and drink cost next to nothing. Until now, all anyone knew about Albania is what we’ve learnt from films like Taken.

Luckily the Kala organisers also have a very special set of skills. They transformed a holiday resort on the Albanian Riviera to a party paradise. Never have I been to a festival of such jaw-dropping beauty with an atmosphere and a line-up to match. Here’s everything you need to know about Kala 2018:

Getting to Kala isn’t easy but there’s magic in that. You’ll fly into Corfu and head to the port to catch a two hour boat across the Ionian Sea to Albania.

As soon as we stepped on the boat speakers were pulled out of nowhere and the party began. A rogue Brit immediately hijacked the microphone and yelled shout-outs to every area in the UK to wild applause. “LET’S HEAR IT FROM MY NORTH LONDON CREW! PECKHAM! MANCHESTAAA.”

Most people had grabbed bottles of spirits from Duty-Free at Corfu Port. This, paired with a cheap bar and a particularly well-received remix of Toto’s Africa, meant that by the time we reached Albania the 200-strong group were in high spirits/completely shit-faced and everyone was best mates.

After an hour coach journey that was held up by a young Irish lad who managed to get stuck behind a bus seat we finally arrived at our hotels.

Your Kala festival ticket includes accommodation that ranges from 2 to 4 star hotels. Some are better than others. I was in a 4-star Premium hotel that was a taxi journey away from the site. This meant we had to pay for taxis for every journey to and from the site which was a real downside.

Despite this the hotel had its own private beach, swimming pool and the seafood linguine was unreal. Coming back to a clean bed in a nice hotel made the festival experience a lot more pleasant. 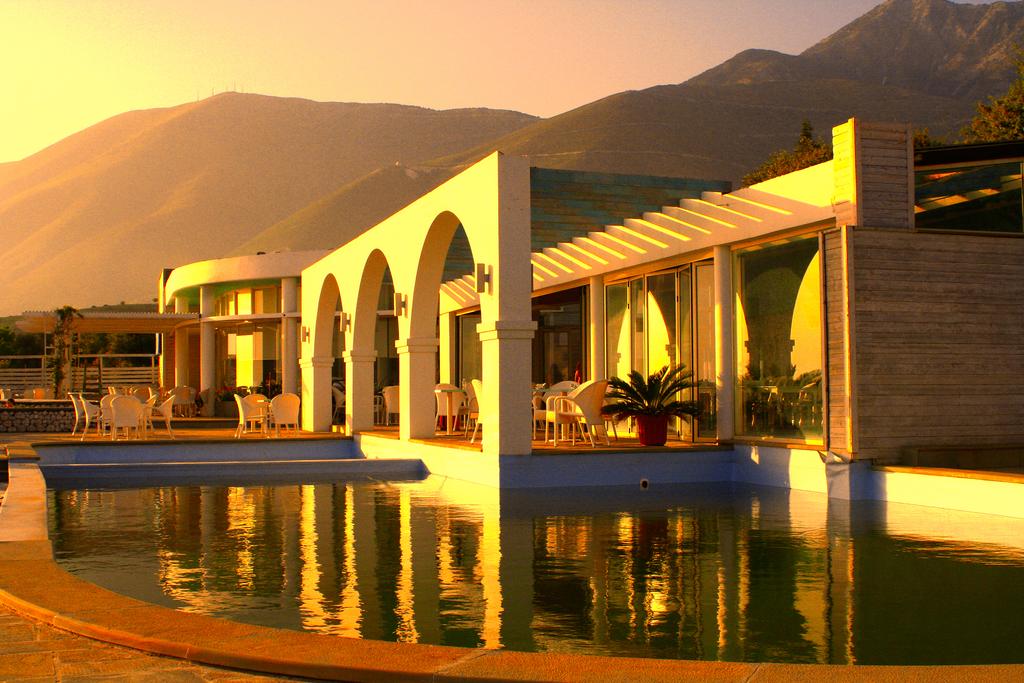 Kala is outrageously beautiful. On one side you face the shimmering blue water of The Med; on the other the craggy cliffs of the Ceraunian Mountains. For the first hour on the festival site I was mostly speechless, something that doesn’t occur very often.

Kala held five stages. Empire hosted headline acts like Todd Terje, The Black Madonna and Moodymann. Here you can face the stage and dance to the mountainous backdrop or walk a few metres to the beach and listen to tunes while staring out to the sparkling waters of The Med.

A short walk away you’ll find Beach Cove, a small stage directly on the beach where you can party at sunset. 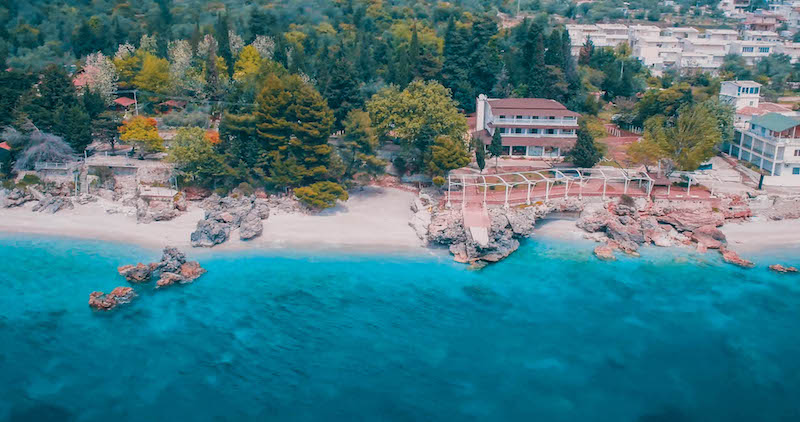 My favourite was Yacht Club; the decked stage juts out over the sparkling water and a cocktail bar in the centre serves two-for-one drinks all the time. There was something charmingly unpolished about the misspelt posters announcing that “Every hour is happy hour”. When it popped off at Yacht Club, which it did regularly, it felt like there was no better place in the entire world to be than there at that moment. 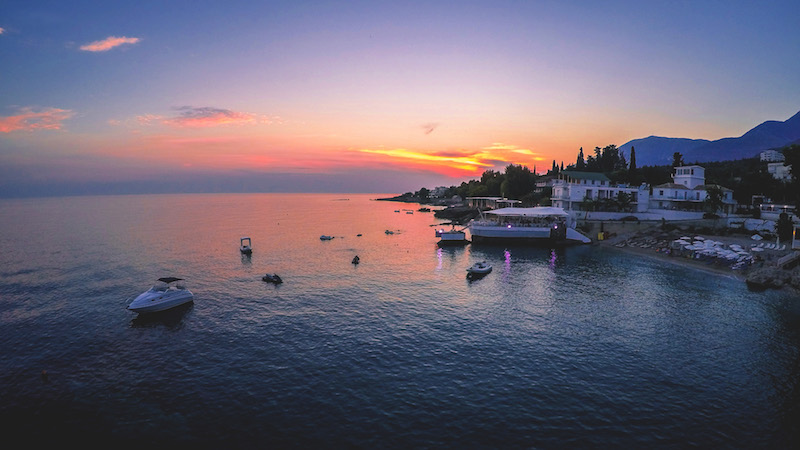 The most spectacular stage and the most mispronounced was Gjipe*, accessible only by speedboat. We jetted over on Saturday afternoon to catch Bjorne Torske’s set. The decks at Gjipe are at the bottom of a towering cliff face which magnifies the sound and creates a sound-system to rival Berghain.

Splendour is for chilling, with DJs playing laid-back bangers throughout the day and yoga classes taking place at sunset. You can even book a massage to stave off the back ache from last night’s dance marathon.

As Empire was quite far away, the other stages were virtually empty when headline acts were playing but I imagine this’ll be ironed out next year when Kala increases capacity and sells out immediately. 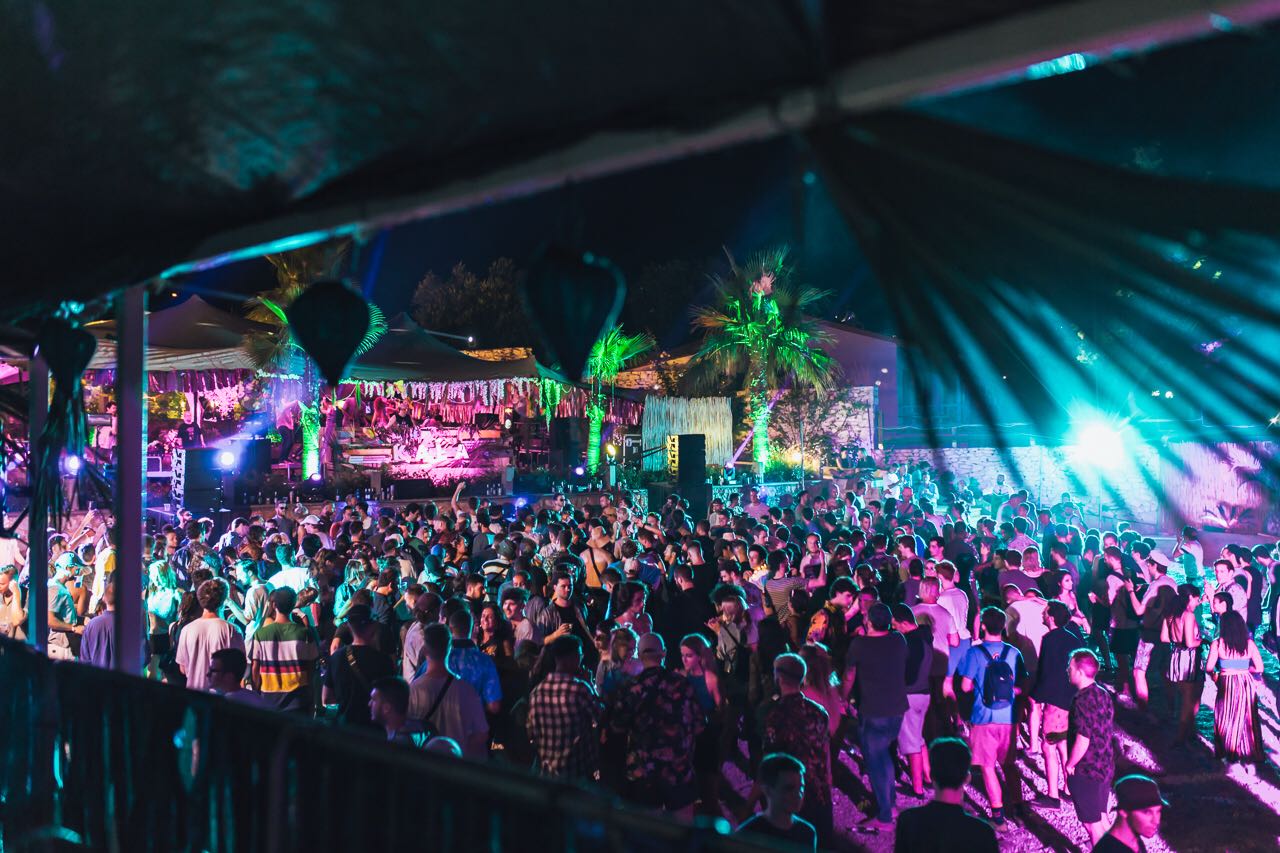 Kala ensured their line-up rivalled that of the festival veterans this summer. It was refreshingly diverse with a good mixture of lesser known DJs and crowd-pleasing headliners.

Because the stages all faced out to sea there were no sound constraints or curfews which allowed the crowd to relax and really lose themselves in the music. Here are our highlights from the festival:

Moodymann is an arresting presence in any setting. The Detroit hero explored a vast array of genres in his set, taking us on a journey through house-infused dance tracks seamlessly mixed into funk and jazz numbers. It was a pleasure to hear him engaging with the crowd in his unmistakable booming voice. As the first headline act of the festival his set was a mind-blowingly good start.

Korean born, Berlin-based DJ and producer Peggy Gou was one of the most anticipated acts of Kala and her set did not fail to deliver. A combination of her signature eclectic style with some classic ‘90s dance floor bangers made her performance one of the highlights of the festival. At Night Peggy Gou’s Acid Journey is one of the most gloriously fun remixes of all time. (You know it’s a good set when you need to pee but can’t drag yourself away from the d-floor.)

The backdrop definitely added something special to Bjorne Torske’s high energy set. The Scandi veteran did not disappoint with a fun and upbeat mix of funk, disco and house tunes. There’s something about being on a beach you can only access by boat that truly lifts an atmosphere; the crowd were dancing like maniacs. 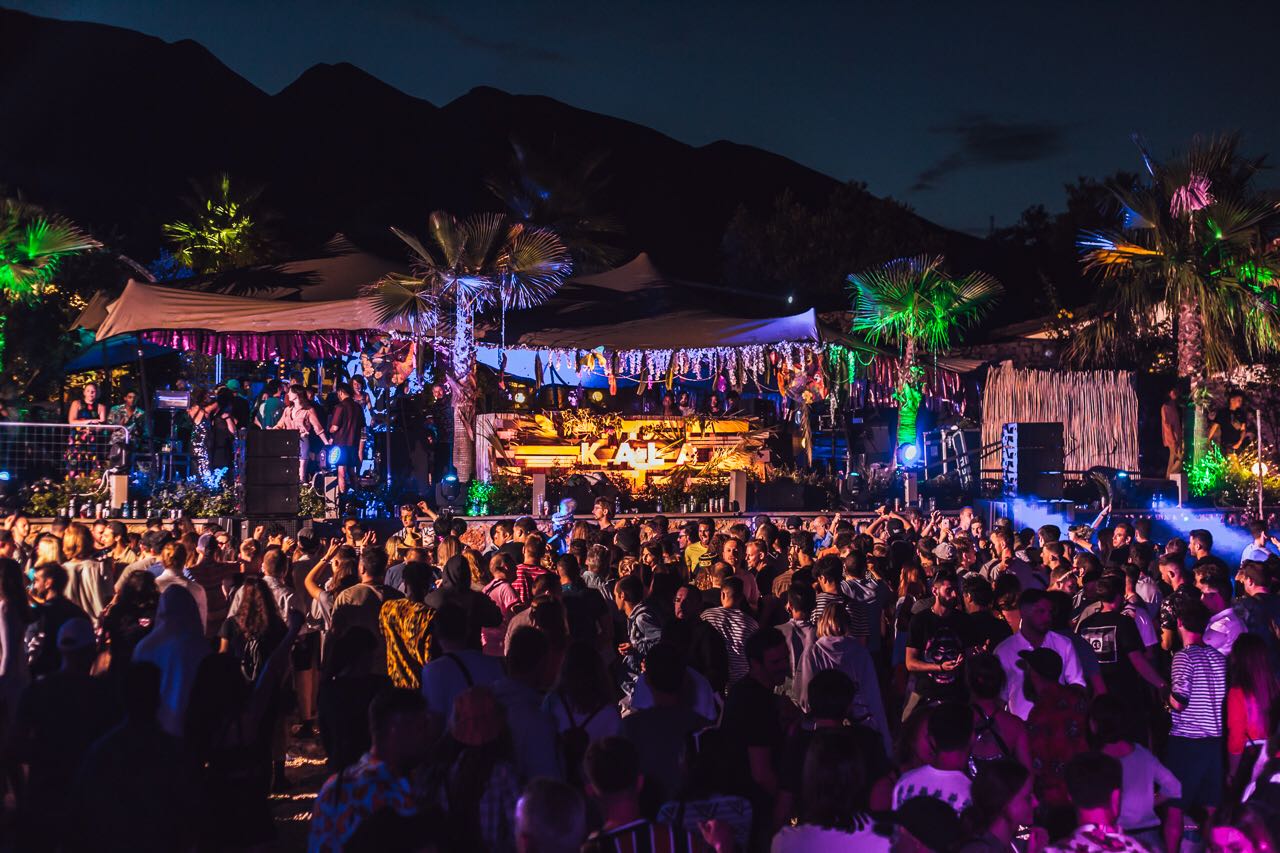 This was one of my favourite sets of the festival. Danielle gauged the mood of the crowd perfectly with a fun, upbeat mixture of house, funk and disco. By Sunday night everyone at Kala was totally at ease in their environment and best mates with each other. Danielle danced and fist pumped along with the crowd making her seem just as much part of the party as we were.

This surprise set from the house hero of 2018 was by far one of the highlights of the entire festival and is a good depiction of the laid-back atmosphere. After the Kala team hung out with the DJ on Sunday evening they organised a last-minute set at Yacht Club, announcing it on their Instagram on the day. It was totally spontaneous and half of the festival headed over to Yacht Club to get down to his signature lo-fi house style mixed with nostalgic R&B samples. 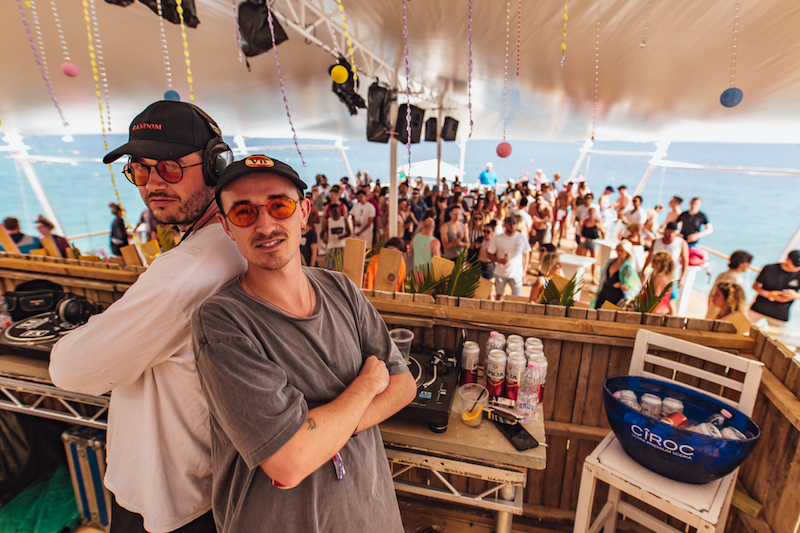 The sound at each stage was excellent. If you wanted to get up near the DJ booth and lose yourself in the music you could, but it was equally easy to chat and chill further away from the stages.

A first-year festival in a totally new country attracts a special kind of crowd. Kala attendees weren’t about fashion or cliques. They care more about exploring new territories, listening to good music and trying new things. Basically, everyone was sound as fuck.

The festival was on the holiday resort of Dhermi on the Albanian Riviera. Spread across the site was a selection of restaurants, all of which served delicious fresh sea food. The cuisine in Albania is a mixture of Greek and Turkish, and is heavily seasonal. I’ve been having dreams about the prawn linguine at Luciano’s.

Understandably there were some first-year issues. Transfers were delayed, registration for wristbands closed at 7pm and transfers from the hotel to the festival site were expensive and unreliable.

The cost of the boat transfer wasn’t announced until very late and it cost £80 inc. admin fees, about a third of the festival and hotel ticket. Personally I’d rather pay for everything in one go, including boat transfer, speedboat to Gjipe and transfers from the hotel to the site.

The first year of Kala must have been a logistical nightmare. A new festival in a new country on a new site. But the line-up was brilliant, the site was one of unrivalled beauty and the atmosphere was incredible. All things considered, not much went wrong at all.

Perhaps Kala is best summarised by the atmosphere at 2pm on Sunday afternoon. England vs. Panama. I sat amongst 150 other Brits, seafood linguine and pint of beer in hand chatting to my neighbour like we were old mates even though we’d met minutes earlier.

As Harry Kane walked off the pitch after scoring the third hatrick in England World Cup history a chorus of Football’s Coming Home took form. That’s when I knew – whatever the result of the World Cup this summer, the organisers of Kala are definitely on to a winner.