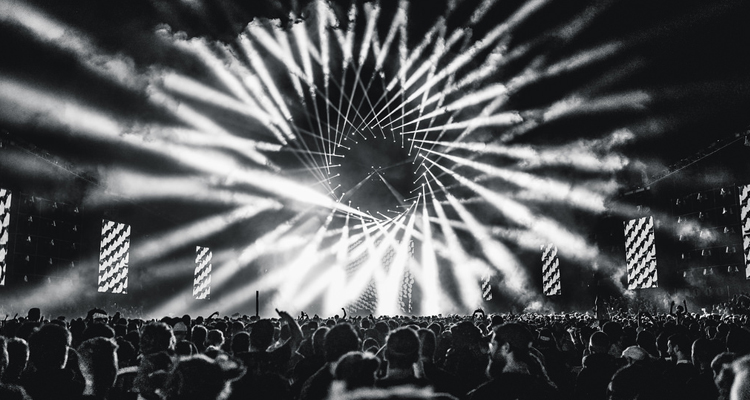 Dour Festival 2017 a festival where the lineup wasn’t even coming close to the souls who made it.

We were all very hyped for this one, because of the ridiculous lineup that it presented. Artists like Noisia, SaSaSaS and Modestep I was really exited for, especially with the previous festivals I had been (Rampage and Liquicity).

I’d met with my friends at Dour after the 5 hour travel we’d took by bus. We went with Maximal and got free beer on the way so we were ready to go as we arrived. The first thing I noticed entering the terrain was the variant strange of people Dour draw. Parents with their kids, teenagers with their freshest clothes, mellow hippies, elfs, dwarfs, you name it. Anyways, beautiful souls coming together with one purpose for the week: DOOOURREEUUH!

Arriving at the tent (we were on the previous C section, a 15 min walk) I noticed I fucked something up, my tent was small. And i mean… REALLY small. Back then I was still concerning about this kind of stuff… looking back at it I know now what an impact the festival made ;). We met some neighbours, had a few drinks and preparing for the first night out. As the day went by the epic waves of people shouting DOUREUH! Made everyone wanna go all out as we entered the terrain.

First of we went to the Dub Corner stage. Feeling a little drunk this was the perfect setting to sit back relax and look around. As the night proceeded we had a walk around, just to see where everything was. I couldn’t wait for the RedBull stage to open as the lights were already looking dope as fuck. At 2am we went back, had a chill at the tent and went to bed.

WAKE UP GUYS. IT’S 0830am AND WE NEED TO START DRINKING. DO YOU KNOW WHATS ON THE LINEUP TODAY? BREAKS X LOADSTAR X MINDVORTEX  ft DAXTA MC!! Is how i woke up at second day of Dour. My breakfast was a healthy portion of beer and some crisps we still had from the bus. Long story made short, we were already way outta hand. This was only our second day and we were going in as bikers doing a 280km/h wheelie in a residential area.

At 1300pm de decided to go to Lidl, as we needed food and drinks. We took some bags and went walking. The walk took us about 45 minutes but it wasn’t bad at all, since everyone passing by having the same kind of energy. On the parking lot you’d find these piles of empty bottles of booze.

The first day Lidl situation (this was probably nothing as this was at 1:30pm)

As the day passed by we were ready to check out Loadstar. We went to the RedBull stage and man… what a stage this was. 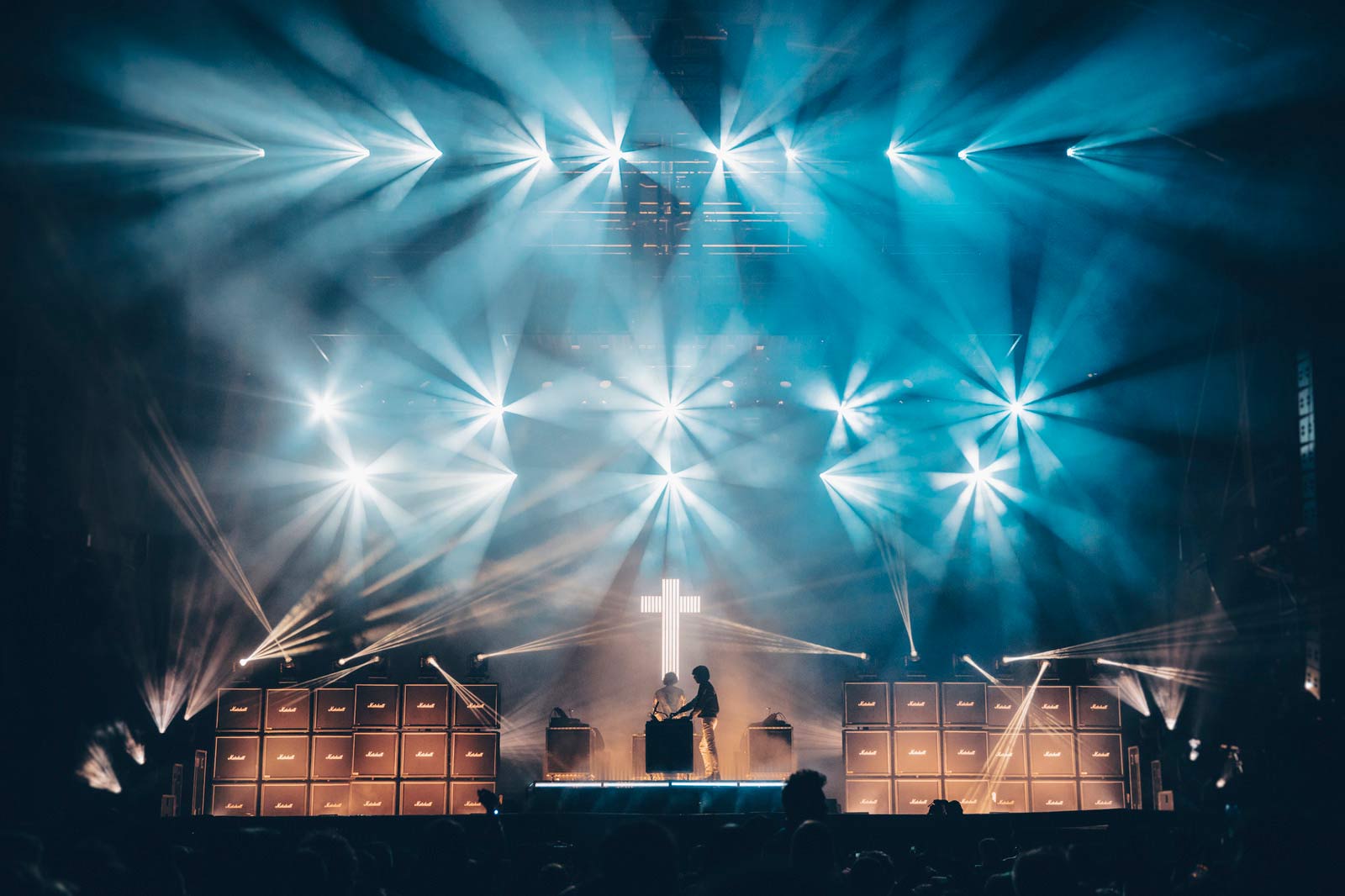 As the night went on I witnessed the first signs of the medical support. Not so crazy to be honest, as this stage was absolute fire. In the end we stayed here all night while enjoying the incredible lightshow/ visuals.  The crowd was insane!!

FUCK OFF AT MY TENT! Was the first thing on my mind waking up on Friday. It seemed like the whole of dour went totally bananas the night before, and as the morning sun peeked around the corner, so were there people with high needs of taking a piss. this combination of sun and piss didn’t let me sleep too well. Waking up in the morning we had some leftovers from the day before, and made sure to ‘take it a little slow tonight’, since it was only Friday. At like 2pm we wanted to take a shower. At half past 4 we finally went, and at 4 we returned knowing there was NO WAY we were going to wait in that line. We washed ourselves off with baby swipes and started having a good time again.

Can you check the lineup for tonight by the way? A friend asked.

Two Door Cinema Club, The Underarchievers, NAS, NOISIA, Nina Kravis and then Panda Dub on the one side and Pendulum on the other as a closure.

Reading this out loud made me realise the intensity of Dour. My hangover disappeared once again because of the sickness (or do I say cureness) of this lineup. We ate a burger (overall the food was really good! especially the Beef Burger, damn i’d eat that baby any day) and I felt like going out, so we went on. Standing in line for the entrance of the festival I noticed that I had to take a shit! Shit! But then i thought, lets try out the VIP area, let’s see what kind of perks this brings for shitting. I was blown away. You need to understand, Dour is not a clean festival, nor a ‘Look at me! My make up is on fleek!’ kind of festival. I went to the VIP deck and walked in. The first thing I noticed was they were drinking out of glass! It felt like i hadn’t been drinking out of glass in ages. I walked along, and entered the toilet. I was so blown away by this beautiful white clean toilet that I took a Snapchat and this French old guy asked me ‘have you never seen a toilet before?’ I swear to god, back there I felt like I hadn’t.

The best thing about tonight was, every DJ you see up there in the lineup, totally RIPPED the stage apart. Many of then I had seen before, but the Dour setting just made it a little better. You know this feeling when you think your heart is about to explode after the Outer Edges set of Noisia? Eell, I had this feeling for about 5 seconds and then Dead Limits came up. I’m not sure if I ever raged so hard in my life. And so did 1000 others.

Bro, I’m going home. That was the first thing a friend of mine said. After 3 crazy nights in the Dour village a friend of mine went home. When he left and i returned to the tent we were wondering if we were ever going to take a shower this festival. Then a friend of mine came up with the idea to go to the carwash and wash off there, one of the cleanest feelings I had after that.

Returning to the tent I realised it was survival of the fittest now.  People walked around in clothes that were way too small, charging cables in their hair, sandals combined with rainboots, but still all smiling and having a good time.

Today’s lineup was way outta hand. I knew I had to miss some major acts for some even bigger acts. Also, today was probably going to be the busiest day since it was Saturday. All I really wanted to see today (despite the craaaazy lineup) was Die Antwoord.  We want to the terrain at about 9,  SaSaSaSa was the opening act for us for the night. Can you imagine?

Die Antwoord was exactly what I was hoping for. Weird and energizing. Just like Dour. We went back to the RedBull stage to finish off our night, man I love this stage. The visuals, the soundsystem, the lineup, the energy, it just felt so good. Until the music stopped at half past four! We were all so hyped still and then we had to go back half an hour earlier than before! 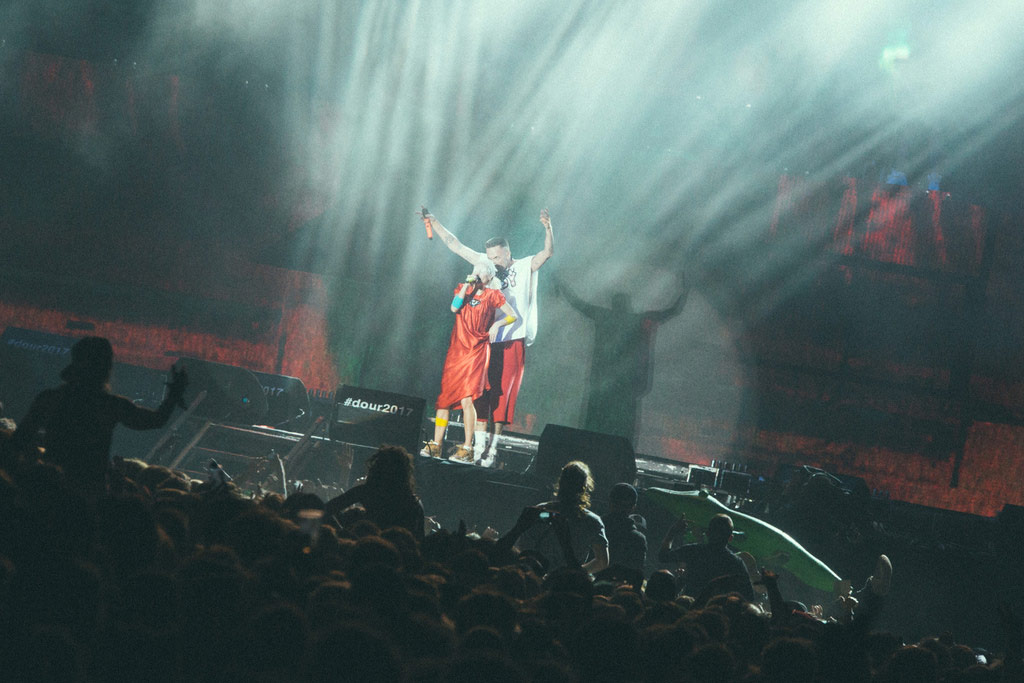 Everyone was still very hyped when it was over. While walking towards the campside my friends ran towards the garbage cams, kicked them over and started drumming. more people stopped and they all screamed DOUREEEEUH! I was laughing like a child looking to all these people and this English dude comes over ‘intriguing, isn’t it?’

Back at the campside these epic afterparties were going on. We talked passed the giant tree, where I think about 40 people stood around this one guy with a massive subwoofer with DnB playing. we started dancing as well since we were still hyped as fuck. After like 10 minutes the dude with the sub started walking and this wave of people followed him. We went back to the tent and had a good chill.

Sunday went by really fast. First we woke up around noon, which is very unusual for a festival. A friend of mine even woke up at half past 4 (like wtf). We ate something and I already made my tent aka the Lidlbag a little cleaner. Today the atmosphere was a little weird, people who skipped sleep the night before and were still baked like a pie, but also people who went home already, with their tents and bags all cleaned up and ready to leave.

For us Sunday night was just like every other night, CRAZY of course, with Talib Kweli, Tchami, TroyBoi, and Adam Beyer waiting for us. With the last energy left inside us we went to the terrain. Comparing the crowd with yesterday we were pretty happy with the fact that like 30% of the people went home so it was way easier to walk along. We went to the Jupiler stage to see Tchami and Troyboi since they were playing after another. First Tchami did his set, which was incredible… but then TroyBoi, who I normally don’t really listen to, came up and really fuuuccckkeddd the Jupiler stage up. For a moment I wasn’t sure it was just me standing there like ‘????!!!’ but then I looked around and no. I wasn’t. Peoples faces  looked like they saw a live granny orgy. And this on Sunday night. So sick.

For closure we went to Adam Beyer on the RedBull stage, which you know is really dark techno. I absolutely loved the techno twist to the RedBull stage since all I heard was drum n bass here. Once again the visuals… I still get chills. At 3am we went back to the tent, we chilled and went to sleep. 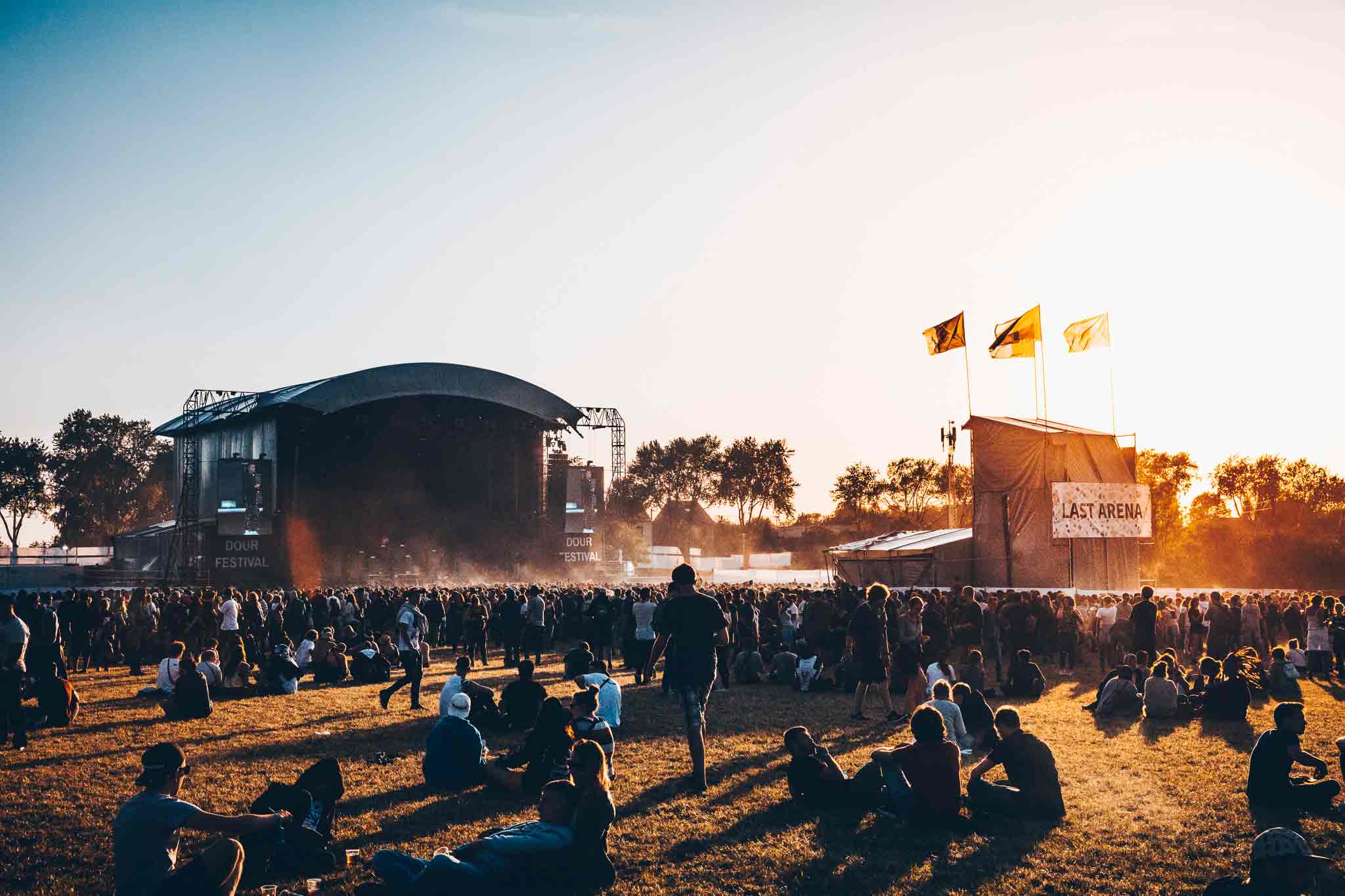 It’s Monday morning 9am and we woke up to the sounds of people saying goodbye already. Walking towards the bus, knowing Dour festival was over made me feel sad and happy at the same time. Happy because I can’t wait to sleep in my own bed again, sad because now I have to wait another year before I can go back to Dour once more.

It’s weird in a kind of way to be looking out for this festival for so long, thinking it would be fun,  not knowing it would be so intense. Dour festival really is something special. I think the best way to describe is that at Dour for some reason you see so much. And I mean from fucked up dixies to fucked up people, to fucked up situations like people losing their phones. But also the smiles, the styles, the children, the incredible energy, the talks. Apart of that of course the smells and the dust, which was constantly there, and the hype over lack of sleep made this festival amazing.

I want to thank everyone for making this one of the best festivals ever. I have MAD respect for the staff, including the handwashers, for making this festival such a succes. Everyone acted nicely, even on Sunday night. I’d really appreciate that. And of course the beautiful souls that made this festival so amazing! THANK YOU AND SEE YOU NEXT YEAR!