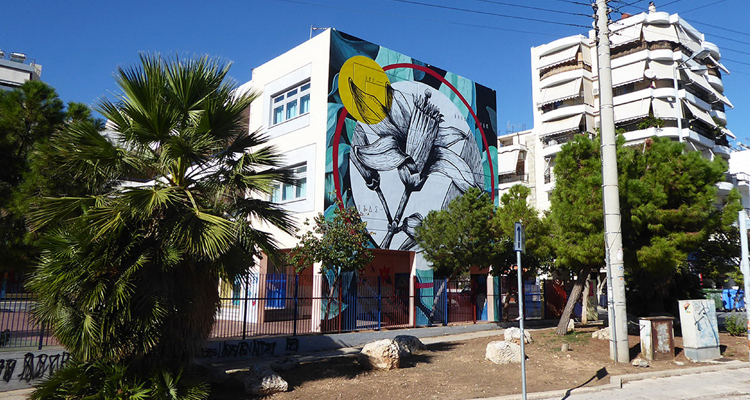 Posted at 17:02h in Exhibitions by Andreas C. Tsourapas 0 Comments

Fabio Petani was in Athens lately, to paint a mural for Athens Street Art Festival, in the Municipality of Drapetsona, at the 15 Elementary School of Keratsini.

Entitled “Ununpentium & Citrus Limon” The wall represents a Lemon Tree, a typical Mediterranean plant, in a large light blue circle. Outside of this, there is a turmoil of leaves illuminated by a green light that outlines them from the shadows. Finally, a red circular line intersects with a yellow circle representing the sun that nourishes the plants and gives them vital energy.

Fabio’s works are characterized by a disarranged harmony of lines, shapes and volumes which complement each other through the use of faint and harmonious colors, blended into breaking elements. His research analyzes the chemical and molecular aspects of objects giving rise to a lengthy operation of reconstruction of the elements in the periodic table. An increasingly detailed production that brings out an ever-changing organic complexity. Each chemical element, just like each plant, is somehow connected to the environment, the space or the context in which the wall is made. Both, chemical element and plant, are peculiar to decadence and dereliction. But nature, intruding upon buildings in disuse, regains its own space and gives rise to an harmonious contrast between the building’s death and the rebirth of life. His murals represent the life-death dualism, being modeled on the places’ story and getting harmoniously mixed up with the decadent and forgotten industrial architectures. As a matter of fact, all his interventions are made in order to let the work becoming part of the transformation process of the wall itself.

Athens Street Art Festival is a Non Profit, Non Subsidized, Non Governmental and All Volunteer Street + Urban Art Festival established and based in Athens, Greece attempting to promote Social Conscience and Action through Art. The Festival invites a series of exceptional artists and innovative thinkers committed to fostering awareness and education for social change. Through this collaborative effort, the group provoke new perceptions, broaden awareness and education and find creative solutions.

Since its establishment almost 10 years ago the Athens Street Art Festival lead and curated by Andreas C Tsourapas hosted more than 170 artists, and painted in 8 different Municipalities of Athens more than 32,000 m2 of Murals.…becoming one of the biggest festivals worldwide.