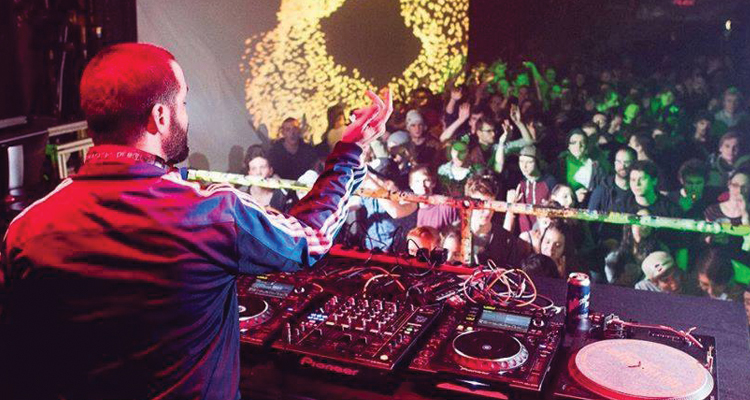 Fleck A LION That Wrecked The Decks!

21 Jan Fleck A LION That Wrecked The Decks!

Posted at 16:59h in Interview, Music by Ohanamag 0 Comments

Fleck, I will start off saying one thing, yes, I am a huge fan and sorry for the words, but your fuckin sick! So how did you get your name?

It used to be my tag back in the day when we were doing graffiti in the streets of Athens, at some point all my friends started calling me Fleck so I kept it as an artist name when I started making music

Also, I want to ask a philisophical question, I heard a song from you, “Music is the Weapon.” How do you feel music is your weapon?

Music is one of the most powerful weapons on earth. It can make all negativity, badness, pessimism, fear, hard feelings disappear and it can bring people together. Music, can spread positive messages, it can guide us and make us sweat, dance and smile!

It’s the same for the music maker as well, not only for the listener. It’s a mutual force that creates strong bonds between different people across the world. Now tell me which other weapon can do all that stuff!

What originally got you into music and truly inspired to start your musical career?

I have always been listening to lots of different types of music, but what made me fall in love with it was the early UK breakbeat hardcore sounds. I remember when I was 13 years old, in Athens, an older guy at school gave me a mixtape that had on the B-side, a few hardcore break-beat tunes like, “DNA’s La Serenissima (Izotonic remix),” and some early Prodigy tracks, and that was it! I was so deeply affected by this kind of sound that I started trying to find out as much as possible about it.

Back then you could switch on the radio and listen to many different pirate stations that played electronic music all day, from Techno to Trance and from House to Jungle. I used to spend many weekends recording cassettes from the radio and then listen to them a thousand times during the week!
There was no internet back then, so the only source of information you could have in Greece about the UK music scene was the radio and a few magazines like Knowledge, that one could find in a few record shops in the city center.

We used to go to reggae, hip hop and jungle parties and later on and we started organizing our own. We also used to spend many hours (and most of our money) in vinyl stores in Athens, where the owners usually would let us practice on their decks! Music was all over the place in my life so I think it was inevitable to start experimenting with it. So in the mid-90s I asked my grandad to get me a little sampler as a Christmas present, as I couldn’t afford it myself, and that’s how it all started!

What was the largest crowd that you have ever performed in front of? How did it feel? To tell you the truth, you actually have my dream job. I have always wanted to know how it feels to make 5 thousand or more people have the night of their life.

I have had the chance to play in front of big crowds at a few different festivals. Maybe I forget a few or just don’t have time, bute I can mention Outlook in Croatia, Distortion in Denmark, Boomtown or even at the Athens Legalize-it festival where we put the sound system outside in front of the Greek parliament and there was more than ten thousand people dancing!

The first time I had to play in front of so many people, I was so nervous that the stage manager brought me a bottle of whiskey and asked me to drink as much as I could before starting my set. So I did. And it went quite well I think!

The feeling of playing in front of such big crowds is not very different from when I play in a small club. (Apart from being a bit more nervous!). The aim is to make people dance and it’s always nice to see them dancing in thousands or even in a few dozens.
For a producer, it is always humbling to see that all these people react positively to your music that probably comes out of your small bedroom!

One question that is always personally interesting to me is about motivation. What pushes you? What drives you to work so hard as a DJ/Producer? I am not a musician but I am a street artist. As an artist I have sometimes struggled with motivation. So, how do you push yourself?

It’s all about inspiration. I mean, when that moment comes and my head is full of sounds and ideas I have to make them come to reality. Doesn’t matter if it’s during the darkest hours of a Tuesday night or a sunny Sunday morning. When inspiration hits I switch on my equipment even if that means that I get no sleep at all.
Sometimes a nice collaboration or a remix work can motivate me. Something you create something alongside for yourself or for another producer and that keeps things interesting. Last but not least, what keeps me motivated is when I see that people appreciate and support my work. That’s what pushes me, to give more!

I know we all have them, but I like crazy stories like when my friend was mixing and the ceiling fell down or when Rafik was in Russia and the club got raided with police with machine guns and cops with ski masks.

Yes, weird stuff can happen in a night. I remember there was a night back in 2010. There was party back in Huddersfield. What happened is that a bouncer got stabbed with some scissors by some crazy guy that didn’t want to pay for a ticket and the police arrived. They soon made us get out of the venue from a tiny door. Sirens, ambulances and panic happened.
Another time, in a party in Italy, I was peacefully drinking my glass of rum and the organizer sent someone to inform me that I had 5 minutes to go on stage and start my set. On my way to the stage some drunk guy punched me hard in the eye for no apparent reason. I couldn’t start a fight as I had to start playing, so I played my set with just one eye open. Weird things always happen.

What have been your most recent projects and what do you wish to do towards the far future?

We have a couple of tunes coming out on Serial Killaz records with Parly B and I’m also preparing an album with Jago for Tru Thoughts that will be ready by next year. We just released an EP called “Aphreka” with Blue Hill on 12” vinyl from Ulan Bator records and a 7” vinyl with 6Blocc and Dandelion on Booyaka Records.

I’m also working on some tunes for Soom T that will see the light hopefully in 2017 and on the second part of Zippin Up my Roots EP for ODG productions.

There’s another project too on its way alongside Mistafire and Ngaio from Bristol, remixes and productions with Ed West on Born on Road records, Ill Billy Hitec, MC Navigator, Mahom Dub, Krak in Dub, The Hempolics, Dubmatix, Jinx in Dub, Shanti Powa, Tamara Blessa, Top Cat, Skru and many others.

A tune we made with Aries and Sheco will also be in the new Aries album.

I could go on with the list but you will see everything getting released sooner or later!

If you want to keep yourself updated for all this music to come, you can follow me here:

Thank you, big up!