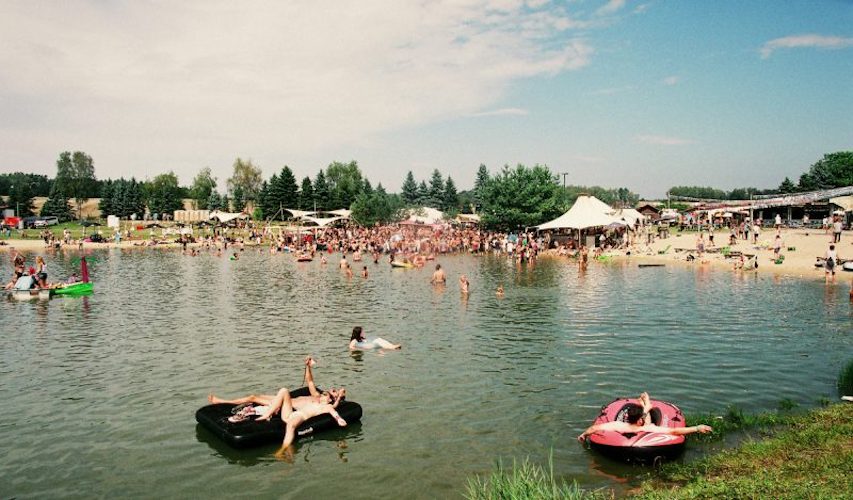 NACHTDIGITAL FLEX 2018: THE RUMOURS ARE TRUE

As a Nachtdigital first-timer I’d heard rumours it’s the best festival in Germany. We arrive on site and complete wristband pick-up at record speed. We roll our tents, beer crates and inflatables through a stream of brightly-decorated bars and chill-out areas, stopping en-route to pick up a free Jaegar and Lemonade from a fluorescent yellow lemonade stand.

“You’re the spitting image of Shanti,” my friend says to a lady with lemon accessories dangling from her hair who hands us our free drink. “I know!” She squawks delightedly and whips out her phone to show us a FaceSwap of her and the DJ in question. We can’t tell who is who.

This instant warmth is commonplace at Nachtdigital. As we trundle past the lemonade stand the festival site opens up before us. A giant FLEX sign stands against the sycamore trees decorated with lanterns. Next to it a fairy-lit bar with hammocks nestled between trees and crates stacked on top of each other – a space for friends to lie in piles on top of each other and for strangers to rest their legs and chat aimlessly like old friends. 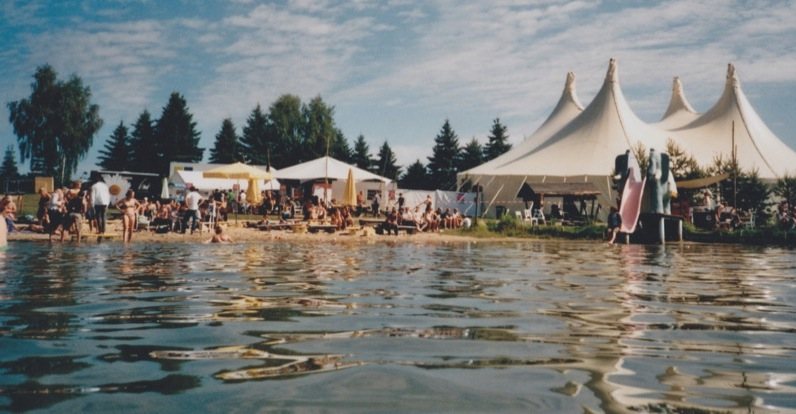 The campsite is seconds away from this social hub. We find a spot as close to shade as possible and set up our home for the weekend in one of the most stress-free camping experiences of my life (shout out to Decathlon’s pop-up tents, and to Sam who knows how to pop them down).

The August afternoon light glows over the lake. Hot festival goers have already plunged into its depths, straddling unicorn inflatables and reclining on air-filled donuts. The mood is calm. A pair of giant eyes with lasers for pupils stare out from the far bank of the lake, watching over the party like some kind of omnipresent Doctor T. J. Eckleburg. 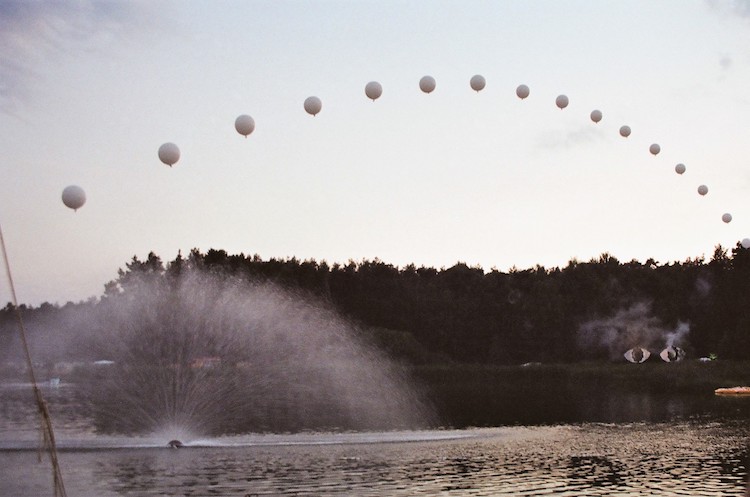 A crowd begins to gather around the festival gates which are yet to open. A low acid beat resounds from within the festival site. We strain our necks to see what’s happening. I catch a glimpse of fresh-faced dancers dressed in pink sheets slowly pulsating their bodies in unison to the loudening music.

“This is the opening ceremony” someone says in my ear. The dancers thrash and stomp to the music, at times becoming invisible in the heavy throngs of smoke being gushed out of machines at all angles.

The gates to Nachtdigital open in the midst of this bizarre yet beautiful ceremony. Portable launches Friday’s line-up on Main Stage. His set stands out throughout the festival as innovative, daring and creative. Dressed all in white the veteran of Chicago house sings into a microphone throughout his set, displaying his multi-levelled raw talent.

As darkness envelopes the site a fountain springs up out of the lake. Real-time dancers are projected on to it, and for the first hour of its debut stunned festival goers discuss its intricacies in disbelief. Nachtdigital is full of these charming touches. “They’ve really upped their game since last year,” a friend comments. 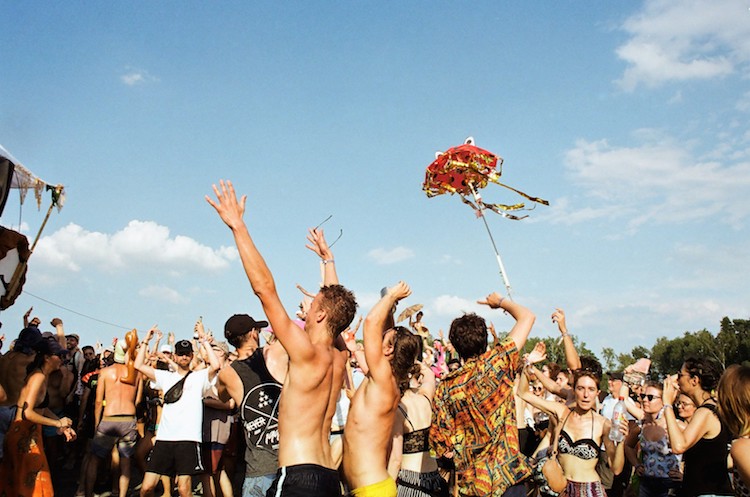 We take a walk to the low hanging, dimly lit Ambient Stage which is tucked away from the rest of the site. Here we caught Johanna Knuttson’s ambient set, tailor-made for this festival. Hers was one of the outstanding sets of Nachtdigital. Afterwards Johanna tells me “When Nachtdigital asked me to play here I was going through some very difficult family stuff. The creation of this set was therapy for me, a creative outlet for me to release all of stress I was going through. Playing the set was such a release for me – it was very emotional.”

Reluctantly we drag ourselves away from Ben UFO & Nina’s chill af set on the Ambient Stage to catch Optimo at the stiflingly hot Tent Stage. Luckily by this time in the morning it’s slightly cooler. As I enter the tent I can barely stand I’m so tired, but Optimo’s performance props me upright for hours, pumping out endlessly catchy tunes, some resembling trance epics. The confidence and assuredness in which Optimo play makes me feel like I’m wrapped in a security blanket of mix mastery, like they’re Formula 1 drivers and I’m a passenger, exhilarated yet confident that every turn on this ride is going to be artfully managed and acutely timed.

Saturday 9am. The freakishly hot Berlin summer makes it impossible to sleep more than a few minutes after sunrise. The sun pulses through my tent and I awake drenched in sweat. I put on my swimsuit and head directly to the lake. 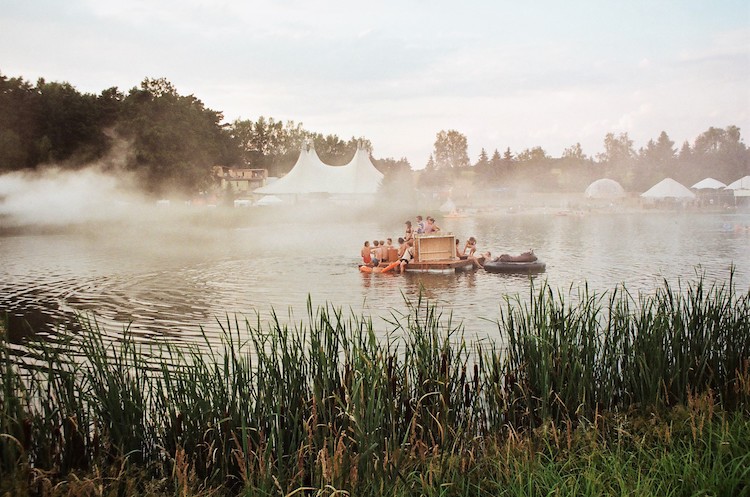 As I lounge by the water I have the pleasure of listening to one of the outstanding performances of the festival – Paquita Gordon on Lake Stage. Milan-based Paquita made use of the fun, silly day-time vibes to play an uplifting mixture of house, disco and funk tunes.

Her tunes act as a magnet for the majority of the festival who are pulled away from their slumber and swims to fill the Lake Stage to capacity. Party goers are forced to watch her shin-deep in the lake, the water offering no resistance to the boogying that goes down. Her set is so mesmerising the groans are audible as she leaves the decks. 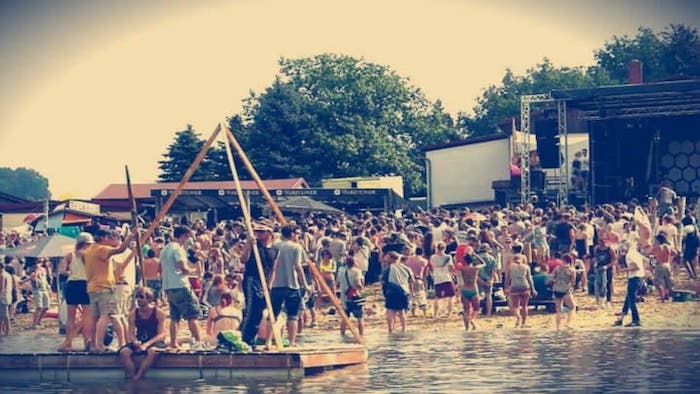 Objekt did not disappoint on the Main Stage with another expansive display of his unparalleled technical ability, fast, low pulsing beats smattered with African drums and innovative production. Halfway through though his set becomes noticeably quieter – apparently a noise complaint had come through from one of the neighbours of Nachti.

The atmosphere on Sunday is joyous, excitable and silly. The music is light, the crowd loose and happy in their new home. Jan Schulte brings the festival to a fitting close with a fun, upbeat and functional house set. I swim out with some friends to a raft in the middle of the lake and dance until Jan closes the festival with Hall and Oates’ “I won’t go for that.” A euphoric closer to a world-class festival.