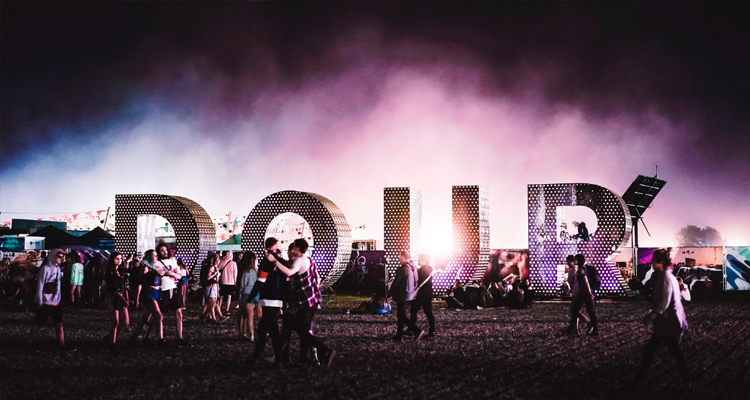 With less  than a month to go we can almost go DOUREUUHHH again. Really looking forward to our favourite moment of the year. I will talk about the artists that you need to keep an eye on. I will walk you through the line up per day.

Amelie Lens, who is a true fan of Dour and got to perform at Dour since 2016, will host the ’Red Bull Elektropadia’ Stage. She decided to invite her Swedish friend Adam Beyer, for whom she recently made two remixes. In addition, Anetha and Farrago will accompany her.

Bonobo, the leader of the Ninja Tune label, will also host a stage. As part of his Outlier tour, he developed the line-up of ‘La Petite Maison Dans La Prairie’ with us on Wednesday 10 July.

That evening he shares the decks with the genius Mano Le Tough and the talented Korean Yaeji. The others who assist this scene are the masked duo from Peru Dengue Dengue Dengue and the DJ and producer from London Poté, the protégé from Damon Albarn.

As good friends of the festival, Salut C’est Cool will host the night at ‘La Salle Polyvalante’. Since 2013 they know how to conquer the hearts of Dour-goers with their legendary and crazy performances. This year, Salut C’est Cool is preparing a “Medieval Madness” evening by Ceephax Acid Crew VS. The C-Men and R-Zac invite. To light the stake, the quartet presents their favourites of the moment, Macmann, Moyen Age & Roland Cristal. In addition they will also take this opportunity to reveal their new album. It’ll surely be a mythical performance and evening!

And last but not least Roméo Elvis will host the night at ‘The Boombox’. Roméo Elvis is the new headliner for Dour Festival. He plays on Sunday, July 14 and shares the Last Arena with A$AP Rocky that day. But besides his show on Sunday, he is also the last curator for Wednesday, July 10, and he wanted everything to do with his Straussfest festival. Together with him the following are also invited: Sheck Wes, Moha la Squale, Vladimir Cauchemar & Todiefor (chocolate present), Shy FX feat. Dynamite MC and his three Belgian favorites of the moment: Ana Diaz, Venlo and Lord Gasmique.

Roméo Elvis literally crushed everything on his way in Dour for the past 4 years with the help of his loyal lieutenant Le Motel. Now he returns solo but accompanied by a lot of new productions, a new album and still the same urge to tear everything apart.

On this day Cypress Hill and Vince staples will perform at ‘The Last Arena’. Cypress Hill formed in 1988 and has sold more than 18 million records worldwide. Last year they dropped their album Elephants On Acid, and they are surely still in the game. Vince Staples is an American actor and rapper who is currently under contract with Blacksmith Records, ARTium Recordings and Def Jam Recordings.

At The Boombox we have Gramatik. He’s from Slovenia and is an absolute great producer.

Bjarki (Happy Earthday AV) a protégé of Nina Kraviz who is known from is techno hit ‘I Wanna Go Bang’ is performing at La Salle Polyvalente. He will plunge into the obscure depth with enticing IDM.

On Thursday we will be topped off with delicious drum and bass at the Red Bull Elektropedia stage with none other than pioneers Andy C, Pendulum and DJ Marky. You can also enjoy the deeper drum and bass from Skeptical B2B Alix Perez, Bredren and Spectrasoul.

On Friday you will get to enjoy Rae Sremmurd and Disclosure dj set at The last Arena. Rae Sremmurd is an American hip-hop duo, with rappers Swae Lee and Slim Jimmy from Tupelo, Mississippi. They are best known for their singles ‘No Flex Zone’ and ‘No Type’.

Disclosure is a British houseact that consists of the brothers Guy and Howard Lawrence. Disclosure makes UK garage style music.

At The Boombox we will get to see IAMDDB, Trippie Red & The High Contrast band LIVE. Diana DeBrito, known by her stage name IAMDDB, is a British rapper and singer from Manchester, United Kingdom. With his album ‘Life’s a Trip’, Trippie Red will also come across Dour. The high contrast band will play a live drum and bass show.

Apparat is a German who started making techno. Ambient soon followed. His collaborations with Ellen Allien are legendary and of course don’t forget the collaboration with Modeselektor as Moderat.

David August was driven by his parents to play the piano from a very young age, but the Italian-German DJ and producer now resorts to revenge by working the DJ booth. The Hamburg-born artist is the author of three albums including “DCXXXIX A.C.” and the inspiring “D’Angelo”, both released in the course of 2018. He navigates between deep darkness and bright light, far from beats and logistical concerns, and gradually weaves his musical web while hypnotizing us. According to Resident Advisor, this is a live performance that you should not miss.

The Red Bull Elektropedia stage will be taken over by techno masters on Friday. Artists such as I HATE MODELS, Nina Kraviz and none other than  Paula Temple.

Nostalgia, loneliness, passion, dreams… I HATE MODELS treats all these emotions with music immersed in melancholy and violence. Navigating through styles, he provokes both emotion and excitement. Synthwave, early trance, cold-wave or industrial music are among the many influences that form his universe.

Nina Kraviz..? Do I still need to introduce her? Nina Kraviz also known as the Techno ‘queen’. Her crazy acid tunes have been turning dance floors all over the world for ten years like no cook would make pancakes swirl in the air.

If you like it dark and rough you should definitely check out the set of Paula. She will blow your mind with her set.

Skepta is coming to Dour on this day! He will perform at The last Arena.  Joseph Junior Adenuga, known by his stage name Skepta, is a British MC from Tottenham, London. Also called grime legend of England.

Also Parov Stelar will perform at The Last Arena. Since 2001, the man has stacked EPs and albums with unprecedented efficiency and ease. His hits follow each other regularly (“Clap Your Hands” to name just one) and we haven’t even talked about the dancing crowds and his latest project Stelartronic.

At La Petite Maison Dans La Prairie, Bicep and Mall Grab will perform. Here the muscle may perhaps be represented as a singular, but the digital contractions that it creates are nevertheless the result of a two-way collaboration. Bicep was founded in 2009 in the seclusion of a quirky apartment in the capital of Northern Ireland, Belfast and consists of Andy Ferguson and his right hand Matt McBriar. Together the two producers bring the wonderful times of house music back to life and offer the genre a powerful new look.

The Red Bull Elektropedia stage will have a lot of dubstep on Saturday with names like Slushii, Dustycloud and Herobust. In between that SaSaSaS will perform their jump up set with DJ’s Macky Gee, Phantasy and their MC’s Skibadee, Harry Shotta and Shabba D (RIP MC Stormin).

Curator Romeo Elvis, A$AP Rocky and big man Action Bronson will tear down The Last Arena on the last day of Dour.

Harlem, the legendary land of the rap, released one of the world’s leading cloud rap players: A$AP Rocky. The inventive centipede of hip-hop from New York is performing in the Last Arena for the first time.

Action Bronson’s first performance at Dour was in 2013, when he was the revelation of the year. Now, 6 years later, this New Yorker has become a central figure representing the American hip hop. But that’s not his only joker. After the release of 5 albums, 2 cooking programs and a bestseller, he realized more than 100 paintings in the summer of 2018. One of them made the cover of his latest album ‘White Bronco’.

At The Boombox we will get to enjoy the boys from Brooklyn, NYC. No one else then Flatbush Zombies. If there was a psychic branch of rap, these three could be the vandal bearers of the genre.

Charlotte de Witte, Kölsch, Solomun and Tale Of Us will let us enjoy fine techno on the last day.

At the age of 26 (Charlotte de Witte), the girl from Ghent is already part of the big ones and she exploits her techno – which does not always have to be minimal – on stages around the world.

Tale Of Us, the Italian duo (both halves born on American soil) looked for inspiration and to maintain their electronic passion in the Mecca of Berlin. These are Carmine Conte – Karm for the friends – and Matteo Milleri. Encouraged by the critically acclaimed Seth Troxler, who often plays their songs, this duo has the wind in their sails.

If you like a bit of gabber and acid, you should definitely check out La Salle Polyvante. Here Lenny Dee, Sevenum Six and Casual Gabberz will break down the tent.

Lenny Dee, famous DJ and producer from New York, is one of the pioneers and masters of the hardcore techno scene. After his first visit to Dour in 2003, he has now confirmed a new date.

The Belgian producer Sevenum Six has been active for a long time in the scene of underground acid techno and free rave parties, 17 years to be precise. Now he brings you an electronic music sprinkled with fun retro acid, a combination that ensures you wont be standing still!

These were a bit of the highlights. If I may be honest, I will tell you not to watch the line-up too much while there. Go to the festival site and be surprised. It will be an unforgettable time anyway. See you there.