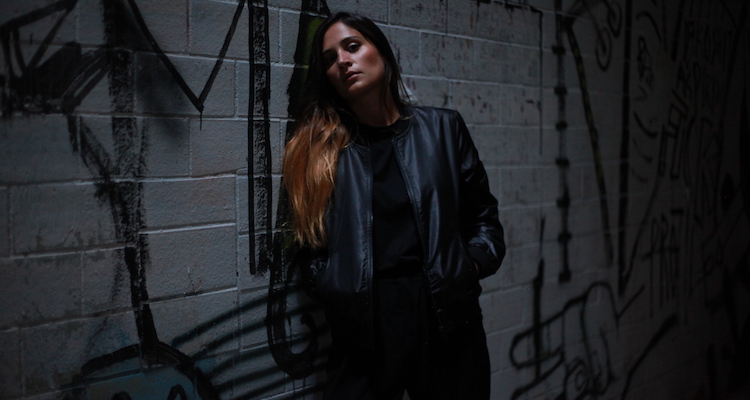 Posted at 15:14h in Interview, Music by Family 0 Comments

The topic of women in electronic music has been hotly discussed in the last few weeks as a result of some negative comments made by electronic label Giegling’s founder Konstantin.

With her track recently played in Berghain and recent gigs including club-institution Tresor, Ohana Magazine caught up with Berlin-based, Dublin-raised DJ Jasmine Azarian to get her first-hand account of the current landscape for women in electronic music.

Where was your first gig?

My first gig was in a tiny box room actually in a club that used to be called the Twisted Pepper in Dublin. I remember being nervous for an entire week beforehand and the massive surge of adrenaline just before I played and ended up playing in front of about 5 people max. That was about 3 and half years ago.

Can you give a little background to your magazine MOTZ? What do you plan to achieve with the publication?

The MOTZ project started in November last year and is run by me and 4 of my girl mates. We started out as an online magazine but the project is continuously growing; we’re now a label and soon will be doing events and there are a few other projects in the pipeline as well. As a female collective we are trying to encourage women to get involved in the industry. It can be quite tough and a bit intimidating but I think when women see other women getting involved it can be inspiring. We’ve had some amazing artists involved, both male and female, and I’m looking forward to seeing what the future has in store for MOTZ.

What have you found most challenging about breaking through as a DJ?

The most challenging thing I’ve had to deal with is myself. I faced a lot of issues throughout the years with whole thing, it’s been a bit of a rollercoaster. Some gigs I do, I think that was great and then there have been others when I feel like am I’m not good enough to be out here doing this. Dealing with my own negativity has been quite challenging, the fear of failure I suppose. I think it’s quite a psychological matter, when you’re playing and you mess up with a mix it’s quite easy to get into a downward spiral and let that one transition set the tone for your set. I have gotten better at dealing with these things though, it’s mostly about dealing with fear and not letting you stop you from doing what you love.

In view of Konstantin’s recent comments – he says that it is much easier for women to get recognition in the industry – what is your experience with this?

I never felt this in my personal opinion, I’d like to think what I have achieved is down to my own talent. A lot more men have achieved recognition in the industry than women. I think if you are a woman it may give you initial attention but there has to be talent there in order to sustain a successful career. But at the end of the day it’s all relative, some people have gotten undeserved recognition and that’s in both genders. There is a bit of luck involved in some cases and in other cases it’s not what you know, it’s who know. But if you work hard, persist and are talented there is no reason why it shouldn’t work out for you regardless of your gender.

Have you experienced much prejudice in the electronic music scene?

A while back I did an interview with an artist and another producer didn’t like him and tried to intimidate me to delete it. When I refused too he called me a stupid girl ‘living in a pink bubble’ and went on to discredit my magazine in a Facebook post. I don’t give into intimidation or bullying on any level and I have a quite a thick skin so that will always stand with me.

I feel that if you’re a woman in the scene you are more inclined to receive backlash and criticism. Recent cases are Rebekah and Nastia whom both recently got accused of fake DJing. Nina Kraviz is constantly getting criticised and, more recently Lady Starlight’s Against The Clock track video for Fact Mag was flooded with sexist comments. I’ve been lucky that I’ve only had a few isolated incidents and most people have been supportive.

Are you surprised by Konstantin’s comments? Is there a supportive community surrounding women in electronic music?

Not really surprised, there will always be people who have these opinions, it’s more disappointing that it’s from someone with a well-respected label. In music we should be supporting each other and encouraging each other not putting others down, it’s not what music is about. Electronic music stemmed from the gay black community so it seems a bit ironic that people voice hateful opinions from a scene that was created by the minorities. Being homophobic or sexist will never stand well in the music community. So the only people they’re damaging is themselves.

Good does come from bad and it was incredibly refreshing to see how many people were supportive of women and stood against Konstantin’s outdated remarks. It restores your faith in the scene and shows how much love and support is there. There will unfortunately always be people who have these opinions but we just have to unite together with music.

What would be a positive step forward from the negative press surrounding these comments?

I guess to get out there and support female DJs, go to their shows, share their music etc. I recently saw the Black Madonna who absolutely killed it on a boat party with B. Traits standing beside her. There was so many girls standing at the front dancing and enjoying the set. There was a really strong sense of female energy and I felt proud to be there and witnessing a display of female empowerment. And if you’re a female artist I would suggest to take the negativity and channel that energy into your music and show ’em what you’ve got! The worst thing would be to listen to such outdated opinions.

Jasmine Azarian will be playing at The Summit Fest 2017 in Kosovo in September.