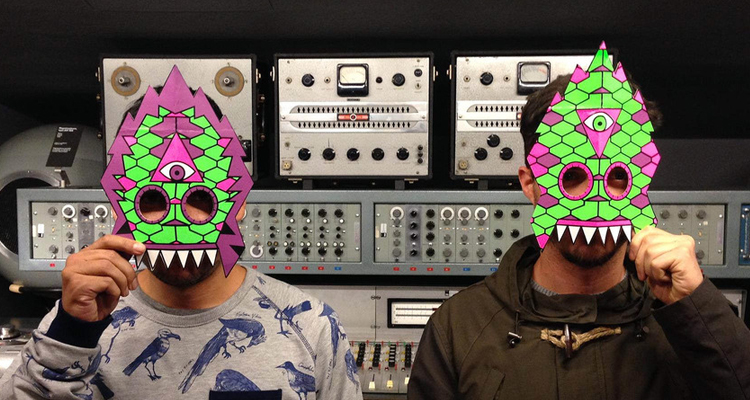 Posted at 09:10h in Music, Releases by Ohanamag 1 Comment

Dengue Dengue Dengue! is an audiovisual duo from Lima, Perú. Behind the masks are Felipe Salmon and Rafael Pereira, two producers, dj’s and graphic designers. Their work focuses in exploring native rhythms from Peru and other parts of the world, recreating them in an electronic form, mixing the old with the new, analog and digital, to create their own unique sound and visuals. Their musical explorations go from Psychedelic Cumbia to Dub, from Salsa to Footwork, from Tribal to Techno, the sound and visual palette keeps growing and adding more and more flavours to the mix.

When the Peruvian duo Dengue Dengue Dengue first broke into the scene, the world immediately surrendered to their mesmerising blend of traditional cumbia with the modern electronic rhythms of dub, techno and dancehall. After making this local movement and gaining international attention with their celebrated debut album ‘La Alianza Profana’ and the follow-up ‘Serpiente Dorada’ EP on Enchufada, the masked duo from Lima is now ready to evolve beyond their musical influences and come into their own as their sound develops into something truly unique with their new album ‘Siete Raíces’.

Taking its name from a traditional Peruvian liquor – a potent beverage brewed from several jungle plants with mystical and aphrodisiac properties – ‘Siete Raíces’ is a suiting metaphor for a band whose distinctively hybrid sonic recipe has been perfected over the years. From their first single ‘Guarida (feat. Sara Van)’, where they introduce a melancholic vocal component to their sound for the very first time, to Murdah’s frantic juke influences or Badman’s tarraxo leanings, Dengue Dengue Dengue set out to expand the unique hybrid cocktail of sounds that has put them on the forefront of the global club music movement.

‘Siete Raíces’ fully embraces South America’s rich musical traditions while taking these cultural references towards the future, powered by thick bass lines, ethereal synths and dusty samples. Striking a captivating balance between tradition and modernity, Dengue Dengue Dengue pick the best of both worlds to expand their unique sonic universe, where the rich mystical ambience of the Peruvian Amazon is translated into an elevating experience for the world’s most forward-thinking clubs and festival stages.